Democrats enter the new year with a fresh victory and a full head of steam. 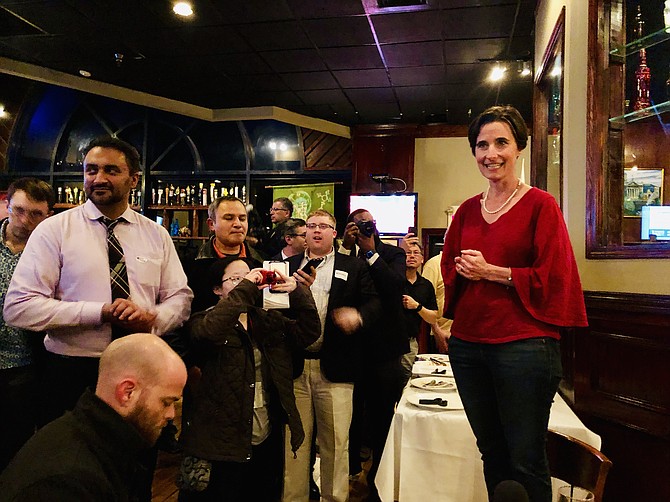 “Let’s continue this blue wave into the fall and take over the House and the Senate.” —Jennifer Boysko

Virginia’s 33rd state Senate District was once a solidly Republican seat, a place where conservative voters repeatedly rewarded Bill Mims for opposing same-sex marriage and championing homeschooling. But ever since Mims resigned to take a job in the McDonnell administration, the seat has been held by a succession of Democrats on their way to bigger and better things: Mark Herring represented the district before becoming attorney general, and Jennifer Wexton held the seat before heading to Congress. Mims is now a Justice on the Supreme Court of Virginia.

Democrats were concerned when Republicans chose moderate former Del. Joe May (R-33), whose position on raising taxes to fund transportation projects caused him to lose his House seat in 2013.

But Del. Jennifer Boysko (D-86) was able to secure a resounding victory in the Jan. 8 special election, taking 70 percent of the vote. She won all 11 precincts in Fairfax County. May won two precincts in Loudoun, Harper Park and River Creek.

“Our internal numbers were to win this race two-to-one, and I think we did a little bit better than that,” said Tripp Frank, Boysko’s campaign manager. “Precincts like Tuscarora, which had never voted for a Democrat, backed Jennifer Boysko tonight. So I think this was a result from Chantilly to all the way to Leesburg that they backed Jennifer Boysko.”

Speaking to a raucous crowd of supporters at O’Faolains Irish Pub in Sterling, Boysko vowed to fight for the Equal Rights Amendment and redraw Virginia’s legislative maps before this November’s elections. She said she would work with Gov. Ralph Northam to increase education funding, and she said she would work for a “friendly and welcoming Virginia for everyone, no matter who you love, where you come from or how you worship.” Boysko joins the state Senate at a time when Democrats believe they are poised to seize control later this year. Boysko will once again be on the ballot in November, along with every seat in the General Assembly.

“Let’s continue this blue wave into the fall and take over the House and the Senate,” said Boysko, thanking volunteers who will be back on the campaign trail again in a few months.

JENNIFER BOYSKO, 52, has been working in politics and government for decades. A native of Pine Bluff, Ark., she was raised in Hot Springs, Ark., before attending high school in Montgomery, Ala. She earned a bachelor’s degree in psychology and French at Hollins College (now Hollins University) in Roanoke. After that, she launched a career in government service, working for U.S. Sen. Richard Shelby when he was a Democrat and later for Dranesville Supervisor John Foust.

After she was elected to the House of Delegates in 2015, she made a name for herself by refusing to play by the unwritten rules of the General Assembly — calling a press conference to slam a powerful Republican committee chairman for failing to hear her bills. Last summer, she unsuccessfully launched a campaign to unseat the House Democratic Leader.

“Jennifer’s track record of success in the House of Delegates foreshadows her many future accomplishments in the Senate on behalf of all Virginia families,” said Senate Democratic Leader Dick Saslaw (D-35). "I look forward to working alongside her to invest in education, advocate for common-sense gun reform and improve our infrastructure.”

Campaign-finance records show Boysko was able to leverage the power of incumbency into a solid war chest, raising half a million dollars — five times as much money as her Republican opponent in a district that includes some of the wealthiest parts of Northern Virginia. Top dollar contributions included $15,000 from the governor’s political action committee and $10,000 from Leesburg attorney Karen Schaufeld. The Democratic Legislative Campaign Committee also kicked in $10,000 to boost get-out-the-vote efforts in the district.

“Only eight days into the new year, and the DLCC has already claimed a special election victory,” said DLCC Executive Director Jessica Post. "With Virginia Democrats just two seats away from regaining majorities in both the state House and Senate, the DLCC is ready to turn Virginia blue this November.”