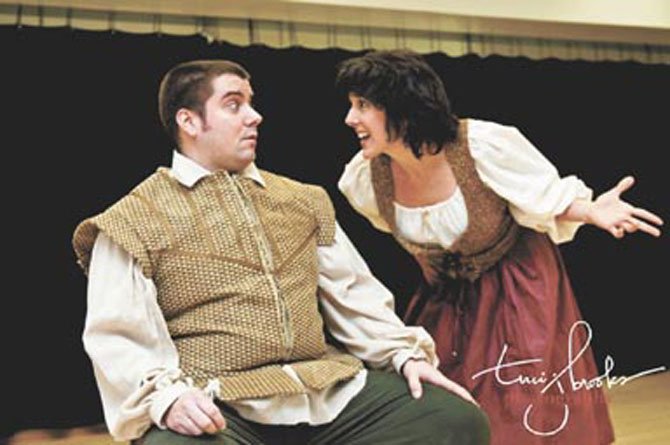 McLean — An enduring work of musical theater, the Tony Award-winning "Man of La Mancha" is coming to the Alden Theatre, courtesy of the McLean Community Players. Inspired by Miguel de Cervantes' "Don Quixote," it is the musicalized quest of a knight daring to confront wickedness, trying to make the world better.

The musical takes the form of a play within a play as Cervantes finds himself in prison awaiting a hearing before the medieval Spanish Inquisition. Out of his vivid imagination comes forth Don Quixote, an armor-clad, "mad" knight-errant striving ever forward to help others with his side-kick Sancho Panza providing witty remarks along the way. 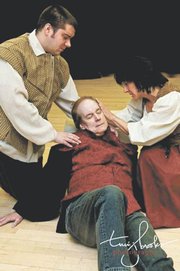 From left, Nathan Tatro, Mike Baker Jr. and Janice Rivera in the McLean Community Players’ production of the "Man of La Mancha."

Director Don Petersen said the show is "admired for the power of its story, the humor in its dialogue and the beauty of its music." In today's world when the phrase "it is what it is" is dismissively used to avoid responsibility, "Man of La Mancha" provides "the belief that things should be better than they are, that one man can change a dark and indifferent world."

"After all, we are not really just helpless and hopeless. If you can dream it, you can make it happen," said Petersen.

Working with Petersen to bring the production into the mind's eye are creative artists like Walter (Bobby) McCoy, the musical director and Kayce Allison, choreographer. The production features over 20 cast members and a 14-piece orchestra and a rich score including the iconic "Impossible Dream."

Mike Baker Jr. plays the inspirational Cervantes/Quixote characters. His Quixote provides deep courage and strong heart as he reaches for the unreachable. "This show still speaks to us today with its timeless message about setting goals and having ambitions. To not be afraid to try to do what you believe."

For Janice Rivera, playing the role of Aldonza/Dulcinea is a fulfilled dream. Her peasant character has lived a tough, loveless life. She must learn "how to respond to care and love. She just doesn't believe love can be real or that she is worthy of it. It takes time for herself to allow unconditional love in her life." Nathan Tatro plays Sancho Panza, bringing his character's antics and comic relief to the evening as he accompanies Quixote on his valiant journey.

The original 1965 "Man of La Mancha" Broadway production ran for 2,328 performances with book by Dale Wasserman, lyrics by Joe Darion and music by Mitch Leigh.