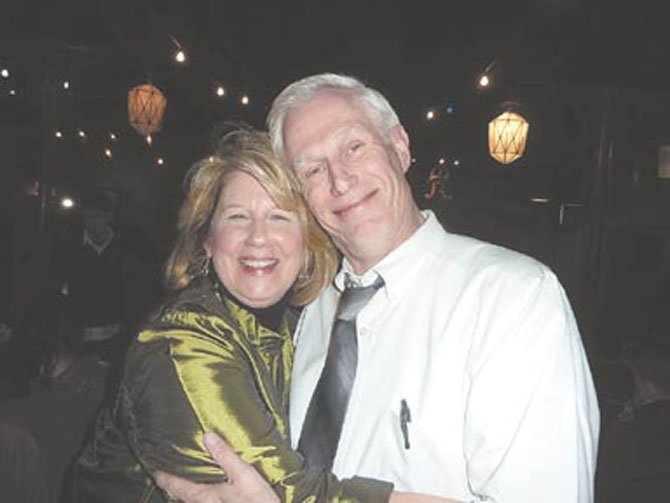 RCP's Sue Pinkman, left, is congratulated by producer and director Eddie Page on her WATCH Award nominations at the Birchmere Jan. 15. Photo by Jeanne Theismann.

Alexandria — The Reston Community Players garnered 15 nominations as the Washington Area Theatre Community Honors announced the nominees for the 2012 WATCH Awards Jan. 15 at the Birchmere Music Hall in Alexandria.

Outstanding Direction of a Musical - Joshua Redford - The Drowsy Chaperone

The RCP production of "The Drowsy Chaperone" earned nine nominations, while "Moonlight and Magnolias" and "The Twilight of the Golds" scored three nominations each.

Sue Pinkman, director of "Moonlight and Magnolias" and a founding member of the WATCH Awards, earned three individual nominations for her work in "The Seagull" with The Arlington Players and "Hairspray" at The Little Theatre of Alexandria.

"I'm very happy," Pinkman said. "Everyone worked so hard on all of these productions and we are very excited about our nominations."

Nominees were selected from 127 productions that were adjudicated at 32 community theatre companies. In each of 38 categories, five nominees (more in case of a tie) were selected based on the average scores of eight judges.

Winners will be announced at the WATCH Awards ceremony March 11 at The Birchmere Music Hall.