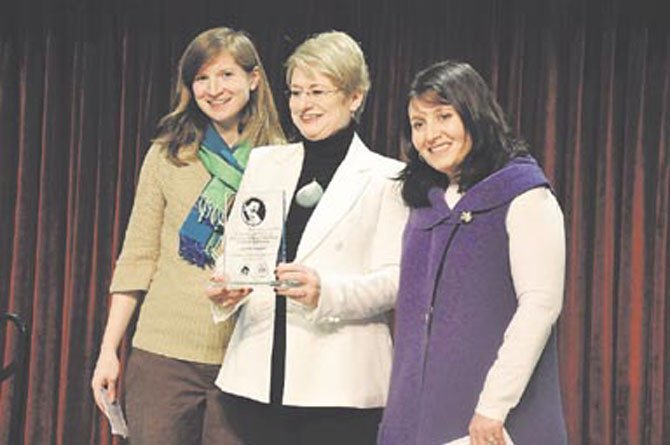 "We often quote Dr. King, but we don’t often decide what we take from his words," said Supervisor Cathy Hudgins (D-Dranesville). "But we’re lucky that Bob Simon built this community to connect people and it was defined as a community that welcomed all, and it has lived up, I hope, to that." 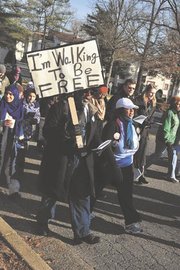 Hudgins was one of many who walked the mile along Glade Drive between community centers singing freedom songs and carrying signs remembering King.

"It was amazing to see the swath of young kids that were a part of the march," she said. "They have to know Dr. King by reading about him and his teachings, but as we walk and look at the people walking, we can see Dr. King’s history."

RESTONIANS Lynn Lilienthal, Kathleen Driscoll McKee and Gillian Sescoe were awarded the community service awards for this year. Lilienthal previously served in the Peace Corps, as well as with Reston Interfaith, the Embry Rucker Homeless Shelter and the Laurel Learning Center.

"Lynn personifies exactly what this award is meant for," said Simon.

"I came to Reston when I was young, in 1968, and this community that was forming was the perfect forum for giving service and doing for others, because in those days there was nothing here," she said. "I encourage everyone to get busy, to find out what you like and what’s good for you and then find a place to go out and do it."

McKee, the current president of the Reston Association, also said her travels growing up showed her what a special place Reston was. Born into a Navy family, McKee said she lived in 31 different places before moving to Reston at age 29.

"My dream involved community and belonging and connecting with people," she said. "I didn’t feel like I was doing so much for others, I thought I was having a great time and I’m tickled pink that it worked out for other people as well." 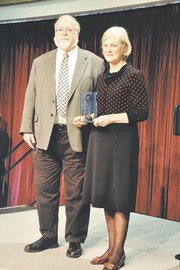 "She often works behind the scenes, while the results of her inclusiveness and dedication to make Reston the best place to live, work and play are clear to all," he said. "By bringing all parts of the community together for the greater good, she consistently honors Martin Luther King Jr. and his ideals of tolerance equity and the promotion of peace."

Sescoe was recognized for her efforts teaching English through Reston Interfaith. When she was announced, a large contingent of current and former students gave her a standing ovation as she made her way up to the stage.

"The class became a close group of student who supported each other, and they relied on Mrs. Sescoe. She helped them learn English and prepare for the citizenship test," said Abby Kimble of Reston Interfaith. "But more than helping them learn, she became a friend and a mentor who gladly assisted them in any way she could."

Sescoe has helped 13 people to date pass the Naturalization Exam, and she has more preparing to take it soon.

"When I started the pilot program, many of my women hadn’t met a Western woman before. We went from not knowing one another to building a bridge to peace," she said. "I’m Jewish and many of my students are Muslim. We learned from one another, learned that when you communicate and understand with one another, that is when you learn about peace and love."

THE KEYNOTE SPEAKER for the event was jazz singer Nnenna Freelon. A six-time Grammy nominee, Freelon has performed around the world and with such jazz luminaries as Herbie Hancock, Aretha Franklin and Al Jarreau.

She preached the importance of "the grace of great things," and told her story about how her mother exposed her to the beauty at a young age, and what she learned during her mother’s battle with cancer, which she died from in March 2011.

"The simple things you do every day can expose you to the grace of great things," she said. "I challenge you to use these seemingly bleak times as evidence that new strategies are needed. These energies will give birth to ways which we can be propelled forward. I challenge you to use creativity, collaboration, compassion and love in the pursuit of great things, grace will surely follow."