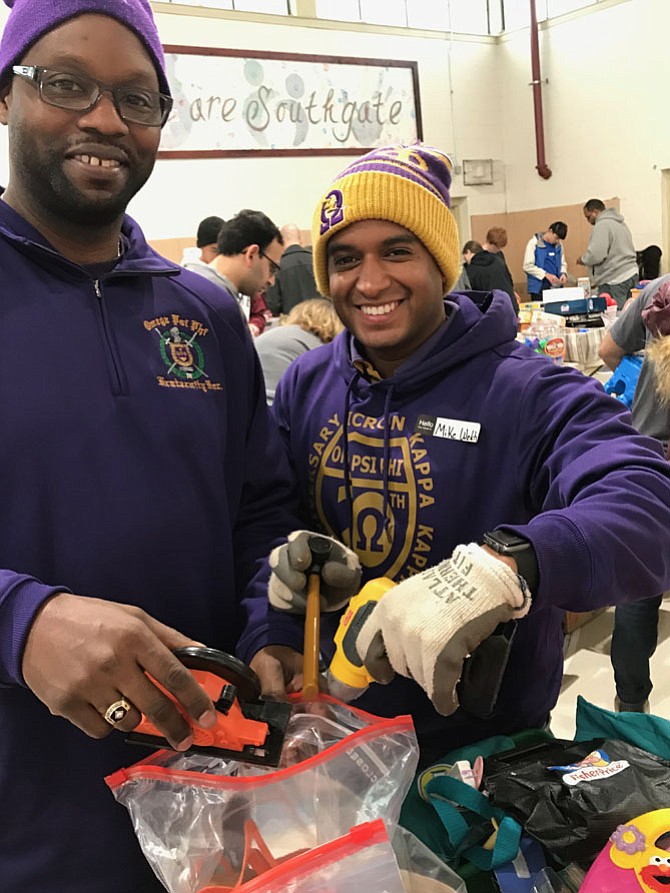 "I think volunteerism is part of the ethic here in Reston. Bob Simon would be proud." — Bill Keefe, Board of Governors, Reston Community Center 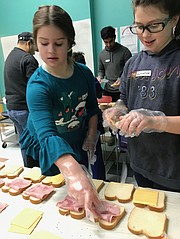 Carolyn Susla, 12, and her sister Katherine Susla, 10, both of Reston prepare ham and cheese sandwiches for clients at the Embry Rucker Community Shelter. The volunteer service activity presented by the Reston Community Center was held at the Southgate Community Center and kicked off a week of events for the 33rd annual Reston Martin Luther King Jr. Birthday Celebration. 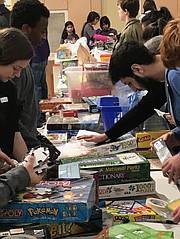 Erica Brasher, 17, of Burke and Ali Durrani of Reston sort toys for The Closet of the Greater Herndon Area, a nonprofit organization that assists low-income families by selling used clothing and household goods at nominal prices. The volunteer service opportunity was one of the 33rd annual Reston Martin Luther King Jr. Birthday Celebration events presented by the Reston Community Center.

Each year since 1985 on the third Monday in January, people in Reston and its surrounding communities have come together to honor the life and legacy of Dr. Martin Luther King Jr. as they celebrate his birthday. This year Reston Community Center (RCC) presented the 33rd annual Reston Martin Luther King Jr. Birthday Celebration with a week-long series of events held Jan. 13-21, 2018 all under the banner question: "Are We Keeping the Promise?"

DURING HER OPENING REMARKS to the crowd of volunteers assembled in the gym, Ha Brock, Volunteer Reston Manager, said, "As a local government, we are always looking for an extra hand." To those present she urged, "Live up to the dream of Martin Luther King."

Cate Fulkerson, Chief Executive Officer, Reston Association also addressed the assembled crowd. She spoke about the spirit of those in the room. "To see the amount of caring here today...the excitement of giving back."

When the remarks concluded, RCC staff directed the volunteers to project sites throughout the center and outdoors. Watching them were Lisa Sechrest-Ehrhardt and Bill Keefe, Board of Governors members, Reston Community Center. Before heading off to volunteer herself, Sechrest-Ehrhardt looked around. She said, "Actions speak louder than words. By doing it, you become part of the process."

Keefe, who stood next to Sechrest-Ehardt, also watched as teens and youth headed into different rooms to volunteer. Asked what he thought of the turnout, Keefe replied, "I think volunteerism is part of the ethic here in Reston. Bob Simon would be proud."

WHILE SOME hearty souls braved the cold wind and headed outdoors to clean up litter from pathways and natural areas, indoors volunteers prepared bag lunches for the Embry Rucker Community Shelter, sorted and organized toys for The Closet of the Greater Herndon area, and cleaned and helped beautify the Southgate Community Center.

Among those preparing ham and cheese sandwiches for clients at the shelter were Reston residents Liz Susla and her daughters Carolyn Susla, 12, and Katherine Susla, 10. Not skipping a beat as they rapidly kept pace assembling the sandwiches, Katherine explained how long they had been volunteering and why. "This is our third year. It's fun. I like helping the community.” Carolyn added: "We will be delivering the sandwiches to the Homeless Shelter later."

In the gym, volunteer Erica Brasher of Burke sorted through a massive pile of toys, verifying each box had all of its parts before it was to be packed and driven over to The Closet of the Greater Herndon area. Asked why she had come that morning, Brasher said she was there to meet her required volunteer service hours for National Honor Society, but then explained something bigger was involved other than service hours. "It helps the community. It is really important to do this, even though this is not my community," she said.

Also on hand were several Brothers of Omega Psi Phi, Inc., Omicron Kappa Kappa Chapter serving the Greater Herndon and Reston areas. Brother Mike Welch told how the organization he was volunteering under was founded on the principles of providing service and uplifting the whole community. "What we are doing correlates to the vision of Dr. Martin Luther King Jr.," said Welch, keeping the promise alive.