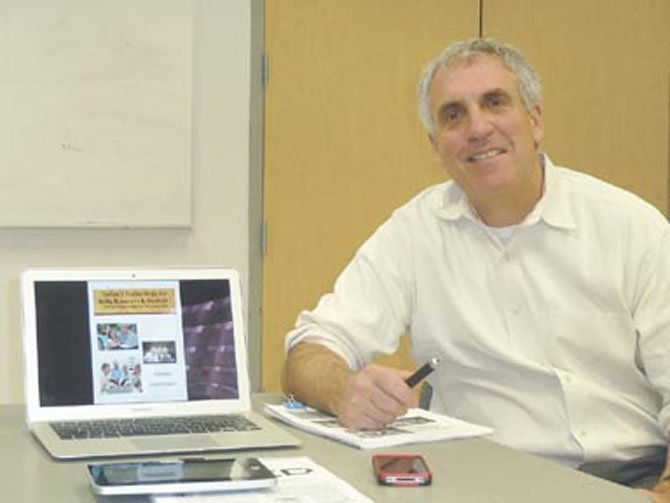 Vienna — Technology permeates the very core of our existence, from computers and phones that think they’re computers to social media.

For the demographics who grew up in tandem with technology – probably those 35 and under – the transition to more-new-fangled tech tools is gentle, a refinement of what came before. For those who were first introduced to tech tools as mature adults, there may be feelings of bewilderment and intimidation. Why is that woman sliding her fingers across her cell phone screen rather than clicking keys? How does my GPS know where I want to go?

Andy Livingston of LAD Communications and Technology understands the technological challenges that many mature people face. So much so, he created a business model that addresses these challenges, presenting his program to towns and counties across the country. Quite simply, he calls it "Today’s Technology for Baby Boomers and Beyond," an introduction to technology for the over-55 population.

"The major problem is that no one has time for this generation," said Livingston, whose career in information technology spans more than 20 years. The children of baby boomers, he says, are busy with their families, and teens don’t want to take grandparents out shopping for electronics or teach them how to work gadgets. "The end result is that this population feels isolated, and no one has the time to spend with them."

IN HIS COURSE, Livingston knows he needs to put his mature students at ease. He doesn’t stand in front of them; he sits to make them feel more comfortable in the environment. It’s more conversational like that, he says. It’s interactive, one big conversation, no pressure.

"There’s energy in the room," said Livingston. "I’m taking time to explain to them what these tools actually do, how they operate.

"There’s a huge lightbulb that goes on the first day."

Livingston divides his program into two levels, and it is up to the sponsoring agency or department to offer it as individual programs or as a two-part series. Levels one and two are presented as individual courses by the Town of Vienna Department of Parks and Recreation, presented over two months. Livingston’s program first ran in October and November of 2011.

His copyrighted program focuses on today’s most common technological tools utilized by the consumer market. More than 1,200 towns and counties in the United States have contracted Livingston’s baby boomer technology program.

"My course is meant to be a sampler of all the different technologies," said Livingston. "If someone needs further help with things, I am available to come to their houses or local coffee shop and review their bucket list of things. People want to learn how to get use out of their own equipment, not someone else’s. I can show them my equipment, my presentation, but what they have at home might be different to use." That’s where the "rubber meets the road," Livingston said. People want to work in their own environment. For people who want to learn to use their own equipment, from digital camera settings and print-outs to computer programs and social media, Livingston offers house calls at, what a former student calls, "very reasonable prices."

Although a student may sign up for level two without having gone through level one, Livingston does recommend that someone unfamiliar with technological tools take the introductory series first.

After taking the course, most of the people in his classes want to take the next step. The course, Livingston says, bridges the gap between unfamiliarity and confidence. "This environment enables them to ask any questions, no matter how trivial they may seem to the person." They are with their peers, all pretty-much on the same learning curve.

"Addressing personal needs is something Andy is very strong in," said Hankins, who hired Livingston to come out to her home for tech guidance after recognizing there was digital equipment she wanted to master.

Hankins said she enrolled in the course because she was hoping to understand forms of technology other than her cell phone and computer to decide if she wanted to pursue those things, such as acquiring a Smartphone. "I asked Andy, ‘what can I do with a Smartphone that I can’t do with my current phone?’ Now that I understand what the Smartphones do, I think I have all the capability I need with my current phone."

WHAT IMPRESSED Hankins the most about Livingston’s baby boomer technology course was his ability to individualize his class to each student. With each gadget Livingston brought into the classroom, students handled the pieces and were invited to ask questions.

Livingston’s in-home support was a "real benefit" to Hankins. He helped her increase the speed of her computer by removing a spyware program from it, and taught her to take photos from her digital camera using settings she had never used before and to print photos directly from her laptop.

Hankins said she feels as if she has a friend who can help her with the next form of technology she becomes interested in learning about.

"We’re the sandwich generation," Hankins said. "Our parents aren’t interested in the new technology, our kids grew up with it. We’re trying to catch the train that’s speeding up ahead of us."