What I Did on My Summer Vacation — Built Rockets, Apps
Votes

What I Did on My Summer Vacation — Built Rockets, Apps 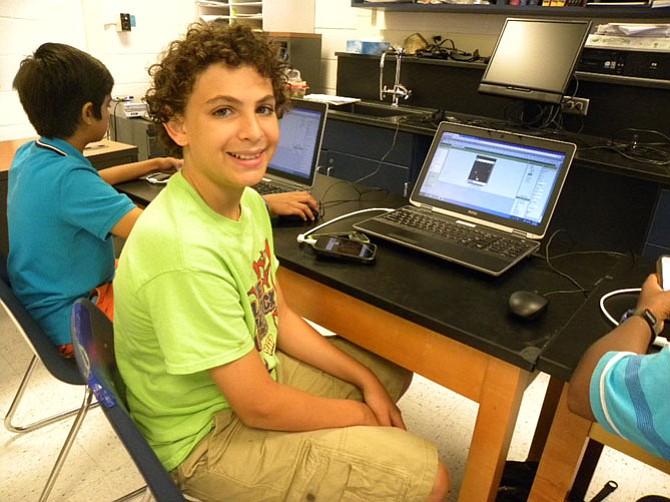 Inside W.T. Woodson High School in Fairfax, Jacob Parker is watching a cartoon on the computer, while his teacher Dan Trau walks around the room, answering questions from students. But the rising Lake Braddock Middle School eighth-grader is actually watching his own creation in action.

From left, eighth-graders Nathan Ma, 12, of Great Falls, and Anthony Cruz, 12, of Kingstowne, wait at the 3D printers for their designs to finish.

Got an App for That? is one of the most popular classes being taught at the Middle School Tech Institute, a program of the Thomas Jefferson High School for Science and Technology. MSTI enables rising eighth and ninth grade students to explore numerous topics in STEM (science, technology, engineering and math) fields during one-week sessions. The program started on July 13 and ends Aug. 7.

Parker’s app is a cat-and-mouse game, inspired by Tom and Jerry cartoons he used to watch. Rising ninth-grader at Chantilly High School Arjun Nachiappan’s app is also game. It is not something he would play but he’s learned a lot so far. “If I didn’t come to this class, I wouldn’t know how to do it,” he said. Luther Jackson Middle School eighth-grader Fernanda Molina, of Fairfax, designed an app that was inspired by seeing her parents being stressed out.

One app that Trau said shows a lot of potential is a baseball app idea from one of the students. The premise of the app is to predict if the baseball is going to be a strike once it is over home plate. “It’s in the beginning phases but that could be really interesting … It’s simple but it’s challenging at the same time,” he said.

BUT NOT EVERYONE is going to come up with a home-run winning product, especially in the span of one week. Trau said that the focus should not be on whether the product failed or succeeded.

“They may struggle but if they struggle and seek growth, then now they learn how to grow and that’s infinitely more valuable than a particular discipline.” Trau said that students do better in all their classes when they shift from a “failure mindset.”

“It’s a ‘I can’t do it right now but I will be able to do it if I do this, if I keep working at it, if i talk to people, if i look at it from different points of view,’” he said.

Some 600 students from Fairfax, Prince William and Arlington counties and Washington, D.C. have participated in the institute. Two hundred students from underrepresented and economically disadvantaged groups won scholarships from Northrop Grumman and the Jack Kent Cooke Foundation.

TJHSST principal Evan Glazer said that it is “extremely important” to do everything to attract students from a broader pool to STEM fields.

STEM professions will only improve from having a variety of perspectives, he said. He added that diversity is needed in all fields, as it creates a richer perspective.

Trau makes an active effort to engage girls in computer science classes. At Falls Church High School, his class had over 40 percent girls.

Creating an environment where girls feel that they fit in and they belong is a way to encourage them to computer science, said Trau.

OUTSIDE THE CLASSROOM, Camila Orr, 12, of Great Falls, the only girl in the It IS Rocket Science class, is about to test the rocket she built. It broke during the transport but she feels confident that it will launch successfully once she reattaches the broken piece.

“I thought that maybe the only girl that was there might have been late at first and that maybe she was coming the next day. But no one else came,” she said. The Cooper Middle School student signed up for the class because she thought it was interesting.

MSTI program manager Craig Lewis said that 85 to 90 percent of students taking the classes have no prior knowledge of the course they are going into. “They may have an interest but they may not know exactly what they’re doing.”

He said that teachers are able to teach students at any level and be able to get them the knowledge to be proficient. “It can get as intricate as you want … You get out of it what you put into it.”