Concetta "Connie" (Botte) Massa, 97, who lived in Vienna for 40 years, died Jan 20, 2012 in Iowa City, Iowa, after a short illness. She was born Oct. 4, 1914 on her grandmother’s kitchen table in Pittsburgh, Pa. Connie was the first of four girls (Rita, Jean, and Mary Lou) and three boys (Fred, Paul, and Joe) born to Salvatore Botte and Theresa (Del Gaudio) Botte, who lived in Koppel, Pa. 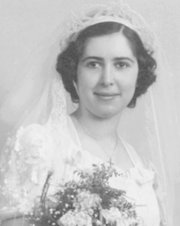 Connie attended Koppel grade school, located across the street from her home at 442 2nd Ave, Koppel PA, and graduated third honors from Elwood City High School in 1932. She attended grade school and high school with her future husband, Manfred Massa (also of Koppel, Pa.) but they did not meet formally until 1936, when they shared a book at Italian language night school. They courted at Buttermilk Falls in Koppel and attended many local dances with Manfred’s brothers and sisters.

Connie and Manfred were married on July 6, 1939 at St. Theresa Church in Hoytdale, Pa. They had several residences around the country, including Cincinnati, Ohio, Hampton, Va., Mountain View, Calif., and Cleveland, Ohio, due to Manfred’s work with different laboratories of the National Advisory Committee on Aeronautics (NACA).

Connie worked at Western Union Telegraph in Pittsburgh, Pa. in the 1930s. She worked the teletype machine and pasted the ribbons of words onto paper for hand delivery of the traditional telegram.

Connie was an avid bridge and pinochle player, as well as a prolific knitter of dozens of afghans, sweaters, socks, and hats for family and friends.

Connie went back to work in 1970 at the National Institutes of Health in Bethesda, Md., working on grant-related contracts. She also attended night school for college credit while working, earning high marks in English Literature and Algebra.

Connie was active in many local groups including Welcome Wagon and Republican Women, and was an active member of St. Mark’s Catholic Church in Vienna, but her first love was caring for her family by knitting, baking and cooking, and supporting family and friends in good times and in bad times.

Connie is survived by her daughters Joanne (Massa) Pinette, and Frances Massa, son John Massa, and sister Rita (Botte) Scopellite, and brother Joe Botte. Connie also had a son, Henry, who was stillborn in 1957. Connie and Manfred have five grandchildren (Michelle, Denise, Phillip, Amber, and Brian) and six great grandchildren (Nicholas, Caroline, Laura, Ben, Roxanne, and Lucy). Connie was preceded in death by her sisters Jean and Mary Lou, and brothers Fred and Paul.

Instead of cards or flowers, Connie requested that you give to your favorite charity or food bank. No immediate services are planned.