Alexandria officials say City Hall is not open for business during a public hearing. 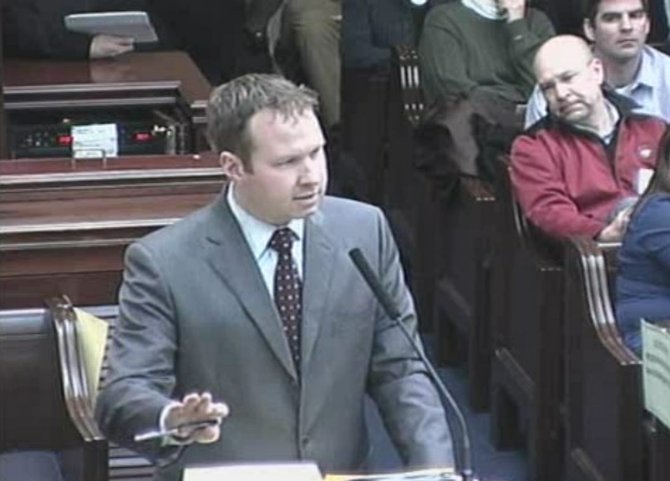 Shannon delivers the appeal to the planning director, who is seated next to Deputy City Manager Mark Jinks.

Jinks looks back toward Shannon and considers how to respond to receiving the appeal.

Jinks grabs the appeal and moves it to a nearby seat as two other city officials inform Shannon that the appeal has not been received.

Is City Hall open for business during a public hearing? Alexandria officials say no, but that could be a matter litigated in the Alexandria Circuit Court.

At the beginning of Saturday’s marathon meeting on the waterfront, Planning Director Faroll Hamer formally rejected a protest petition from more than 200 people who owned land near the properties being rezoned. The petition requested that a supermajority vote of six members be required to adopt the controversial small-area plan. A lawyer representing three of those landowners and two other individuals appeared before council members later that day in an effort to appeal the decision.

“What I have here is an appeal to the (Board of Zoning Appeals) that I’m filing with the planning director,” said Attorney Roy Shannon, motioning to a stack of papers nearby. “All proceedings should be stayed as of right now because an appeal is pending before the BZA. I sent it to the members. I have it here for the director. If she chooses to reject it, that’s her choice.”

With that, Shannon plunked the stack of papers in front of Hamer. As the attorney was walking away, Deputy City Manager picked up the papers and moved them to a chair away from the desk used by city officials. As Shannon was speaking to members of the press outside the chamber, two different city officials came to tell him that his paperwork had not been filed and that he should retrieve it from the chair near a portrait of George Washington.

“It was his responsibility to take custody of the documents,” said City Attorney James Banks. “The office was not open for the appeal to be properly filed.”

Supporters of the protest petition say a Circuit Court judge may eventually decide whether or not City Hall was open for business that day. That could mean one potential legal argument would be that City Council acted inappropriately by holding a vote on Saturday because an appeal to the protest petition was pending. That would be a separate argument from whether or not a supermajority would be required. Banks argues that the process is not applicable to the vote because the process was a text amendment and not a rezoning, but Shannon argues that the code in question refers to a rezoning or a text amendment.

“That’s not a typo,” Shannon said. “This is the plain language of the ordinance.”

The distinction between a rezoning and the text amendment might sound esoteric, but the stakes are high. If a judge sides with Shannon, Saturday’s vote in favor of the waterfront small-area plan could be overturned.