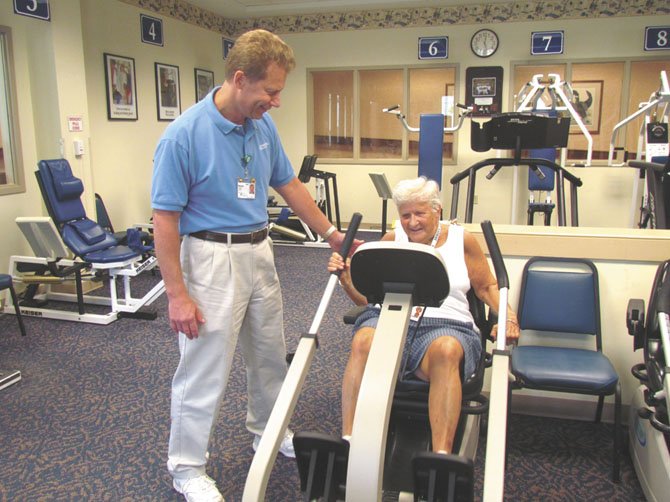 By By Marilyn Campbell

The same staccato beeps and flashing graphics that keep some youth glued to video games might also boost cognitive function in senior citizens.

A study published in the February issue of the American Journal of Preventative Medicine shows that exergaming — exercise combined with video games — might offer a greater cognitive benefit than traditional exercise alone. 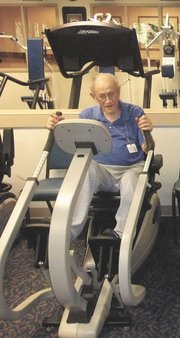 Willard Griffing of Greenspring, a retirement community in Springfield, exercises using a stationary bike. The American College of Preventative Medicine reports that only 7 percent of those over 75 exercise regularly.

"[A] cybercycle, a recumbent bike equipped with a computerized screen that allows interactive virtual-reality gaming, has been shown to improve executive function, which indicate abilities such as planning, organizing and problem-solving," said Kathy Richards, Ph.D., a Herndon resident and assistant dean, Doctoral Programs and Research Development School of Nursing at George Mason University.

The Cybercycle Study, conducted by scientists at Union College in New York, tested 79 volunteers ranging in age from 58 to 99. Some of the volunteers completed three months of regular exercise on stationary bikes; others completed the same amount of exercise on cybercycles. Cybercyclists completed 3D tours and raced against a "ghost rider," an avatar based on their last best ride.

Though the cyclists all exercised for the same amount of time and at the same level of intensity, researchers found that the cybercycle riders had significantly better executive function than those who used a plain stationary bike. They also experienced a 23 percent reduction in progression to dementia compared with the control group. 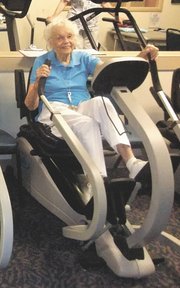 "We found that for older adults … cybercycling two to three times per week for three months yielded greater cognitive benefit, and perhaps added [greater] protection against mild cognitive impairment (MCI), than a similar dose of traditional exercise," said lead investigator Cay Anderson-Hanley, Ph.D., from the Healthy Aging and Neuropsychology Lab and Department of Psychology at Union College. "Navigating a 3D landscape, anticipating turns and competing with others requires additional focus, expanded divided attention and enhanced decision-making. These activities depend in part on executive function, which was significantly affected."

Dr. Jan Gable, an Alexandria resident and the medical center director at Greenspring, says that there are two types of memory changes that occur with age. "The normal age-related change in memory is not progressive and does not lead to disability. This is characterized by delay in recall such as 'word searching,'" she said. "The other category is dementia, a relentlessly progressive deterioration in brain function that usually affects memory first and later judgment, initiative, personality and finally movement and swallowing,"

Research shows that exercise may prevent or delay dementia and improve cognitive functioning in normal aging.

"Although we may not completely understand the specific processes that contribute to dementia, current evidence certainly suggests that physical and cognitive activities improve functioning in older adults," said Kristin Anderson, M.D., M.P.H., family and preventive medicine physician for Molina Healthcare and Community Health Care Network in Reston. "An example of this would be ballroom dancing, which involves learning steps paired with exercise."

The American College of Preventative Medicine reports that only 14 percent of adults aged 65-74 years old and only 7 percent of those over 75 report regular exercise.

"Motivating people at any age to exercise can be a real challenge," said Brad Hibbs, a Burke resident and a wellness manager at Greenspring retirement community in Springfield. "Certainly this generation is especially challenging due to the fact that for most this is not something they were accustomed to doing on a routine basis."

Mary Lee Esty, Ph.D., L.C.S.W., president of the Brain Wellness and Biofeedback Center of Washington, says neurofeedback — essentially biofeedback for the brain during which clinicians attach sensors to a person's scalp to rebalance brainwave activity — might also improve cognitive functioning. "There is more and more evidence that neurofeedback actually improves executive functioning even in early dementia," she said. "A personal experience was when my mother-in-law was in her early 90s, and it was increasingly obvious that she was having to search for words and was having trouble with fluency. But even after just one treatment, it made a huge difference in her word retrieval and ease of conversation."