Most days of the week, Ana Nelson can be found educating others about Alzheimer’s disease in her role as vice president of Programs and Services for the Alzheimer’s Association National Capital Area Chapter. Her free time is spent touring historical sites in Northern Virginia and staying fit through competitive running and other activities. She’s currently training for the Marine Corps Marathon. 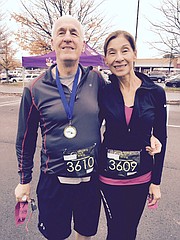 Ana Nelson of the Alzheimer’s Association and her husband Jim stay fit and socially engaged through competitive running. A new study shows that social connections can help build resilience and prevent age-related cognitive decline and dementia.

“I have worked in the Alzheimer’s disease field for 30 years and have always been a promoter of healthy lifestyles,” said Nelson. “When you’re sightseeing and asking questions, you’re stimulating and challenging your mind. When I enter and train for races, I’m interacting with other people and staying socially engaged.”

Nelson is incorporating into her life key elements that are credited with staving off age-related mental decline. In fact, jobs and activities that require complex thinking and social connections can help build resilience and delay age-related cognitive decline and dementia, according to a new study presented at the Alzheimer’s Association International Conference 2016 last week.

The study suggested that working with people in challenging jobs such as Nelson’s had the most protective effect on the brain.

“With the brain, like other parts of the body, you use it or lose it,” said Dr. Dean Hartley, Ph.D., director of Science Initiatives for the Alzheimer’s Association. “If you don’t use it, it goes away."

Activities that require planning and processing information challenge the brain. “Sitting in front of the television is detrimental,” said Hartley. “Being passive doesn’t stimulate the brain.”

In this study, researchers tried to answer questions about whether mentally challenging occupations and activities protected cognitive function against the impact of poor diet. Scientists studied 351 older adults who were living independently and adhering to a Western diet, which researchers said included red meat, potatoes, foods made with white flour and sugar.

Over a three-year period, the researchers found this type of diet to be associated with cognitive decline in older adults. However, individuals in the study diet who consumed a Western diet, but also had a mentally stimulating lifestyle, were protected from cognitive decline.

“Activities that required an engagement of executive functioning, like planning, volunteering or any task that get your mind thinking, those types of experiences are where we’re seeing the best protection against cognitive decline,” said Amy E. Coren, Ph.D., J.D., assistant professor of Psychology at Northern Virginia Community College in Alexandria. Coren was not involved with the study.

Not all types of social interaction have been shown to be equally beneficial to healthy brain functioning, notes developmental psychologist Dr. Linda Cote-Reilly, associate professor of Psychology at Marymount University in Arlington. “Older adults who have a lot of social interaction because they need assistance with activities of daily living do not experience these interactions as positive,” she said. “People are helping them because they have lost the ability to do the tasks themselves and are dependent on other people.”

However, Coren, Hartley and other researchers say that more research is needed.

“The study was done by a well-respected group of scientists, but we can’t say that if you stay socially and mentally active you won’t get this disease,” said Pamela Greenwood, Ph.D., associate professor of Psychology at George Mason University. “There have only been a handful of these studies to date and the results have been inconsistent. For some, it doesn’t have a big impact and for others it does.”