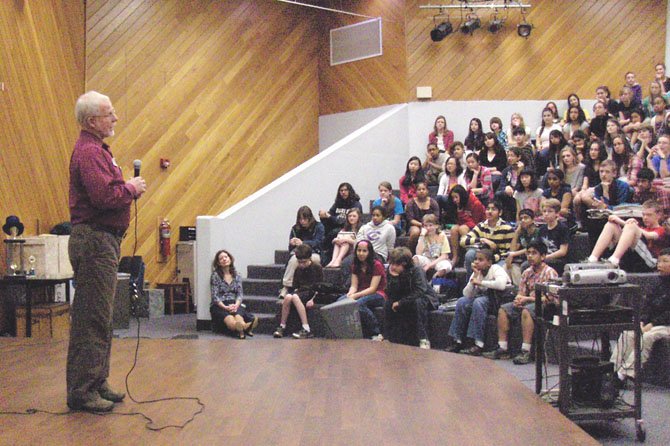 Centreville — Ben Mikaelsen lives in Montana. But before the school year ended, he came all the way to Rocky Run Middle School to share with the seventh-graders his firsthand knowledge about bullying.

“Bullies are the biggest losers in every school,” he said. “They’re not bad people; maybe they were bullied, themselves. Inside — the only place where it counts — bullies feel tiny.” 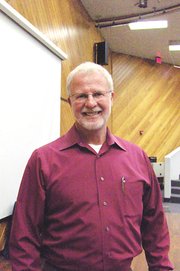 Mikaelsen grew up in Bolivia, where his parents were missionaries, and didn’t go to school until fourth grade. As a “gringo,” he was different, so he was teased and bullied. The family returned to the U.S., to Minnesota, at the end of sixth grade. But Mikaelsen was illiterate, dressed differently from other boys and played soccer instead of football, so the bullying continued.

Then three things happened that changed his life: He started becoming a writer, began to like animals and discovered he wasn’t so dumb, after all.

“Although I couldn’t read or write, I made up stories where bullies didn’t live on earth because they couldn’t breathe the oxygen,” said Mikaelsen. “I liked animals because they never teased me. And I decided, if other boys were going to beat me up, anyway, I might as well be myself and have some fun.”

He learned to read in seventh grade and wanted to be special like “Jonathan Livingston Seagull.” He realized he had to take action to make his dreams come true. He taught himself to dive and wanted to learn how to fly airplanes.

“But my family was poor and on food stamps and I got my clothes from the Salvation Army,” said Mikaelsen. “Airplane lessons cost money, so I started doing chores to earn the money for lessons. Still, I couldn’t control the bullies and, while I rode to the airport on my bicycle, they’d throw snowballs at me and, if I fell off my bike, they’d kick it into the snowdrifts.”

But, he told the students, “Bullies have no backbone. They feel so insecure and inadequate, that they have to pick on others. Even today, it makes me angry. I wish I could go back to that time and to that lonely boy and tell me to believe in myself and never give up. If you do that, your dreams can come true.”

In high school, Mikaelsen added skydiving, cliff-diving and parachuting to his resume and continued writing. “By the time I graduated, I was cliff-diving from 70 feet, had my pilot’s license and had won the Minnesota State Skydiving Championships,” he said. “I scored at a fifth-grade level on the English portion of the SATs, but got into college because of my skydiving championship.”

In freshman English, although he couldn’t spell, a professor told Mikaelsen what a great writer he was. “It was the first time anyone ever told me that,” he said. “So I got a tutor to teach me spelling, punctuation and grammar.”

He eventually became an author, winning the International Reading Association Award and the Western Writer's Golden Spur Award. His articles and photos have been published in magazines around the world, and his novels have won many Reader's Choice honors.

For 27 years, he also lived in a log cabin near Bozeman, Mont., with a declawed, North American black bear named Buffy that he adopted and took care of. Buffy died last year at age 100 in bear years.

“I saved Buffy’s life from a research facility, but he saved my life, too — he saved me from myself,” Mikaelsen told the students. “When I came to the U.S. at exactly your age, I was an angry young man. I didn’t know what to do with my anger, so I became a bully — and I’m ashamed of it. I shoved kids and hit them and thought I was big and strong.”

But, he said, “It took a 750-pound bear to teach me I wasn’t so cool and tough. I knew, if I didn’t start changing and being truthful, he wouldn’t trust me and would someday grow up and kill me. Students, you’re never deserving of any more respect than you give others. Buffy taught me the biggest and strongest people are the ones who are kind, gentle and respectful.”

“Words are more hurtful than fists,” said Mikaelsen. “But is being a bully what you want to do with your one, fantastic life? Every time you ‘dis’ someone and text hurtful things, you show how insignificant, immature and scared you are. Collectively, you’re the future of this planet; and if you don’t get along, there is no future.”

He said he’s spoken to more than 5 million students over the past 25 years, and never met a bully who mattered. “It’s taken me a lifetime to discover who I am,” said Mikaelsen. “Who are you? What’s your unique potential to become something special? You life is the most important story you’ll ever tell, and you are its author.”

“I liked animals because they never teased me.”

Even when he was being bullied, he said, he always had a choice — to fight or walk away. “The bully was always bigger than me, so I ran away,” he said. “Did it wreck my life? No. I’ve traveled all over and I don’t know anyone who’s had as much fun as me.”

Afterward, seventh-grader Lydia Hugo said she enjoyed hearing about his personal experiences because “he challenged us to stand up for someone if they’re being bullied, to not be a bully and to be who you are.”

“It was really cool because he had an interesting life,” said classmate Noah Huntington. “He had lots of adventures and said that, if you X-rayed bullies, they wouldn’t have backbones. I learned that persons who are nice can really affect someone’s life.”

Basically, added Mikaelsen, “If you’re a successful human being, everything else will fall into place. If students are afraid in school, learning can’t take place. Bullying made me feel worthless, so I wanted these students to realize their own self-worth.”