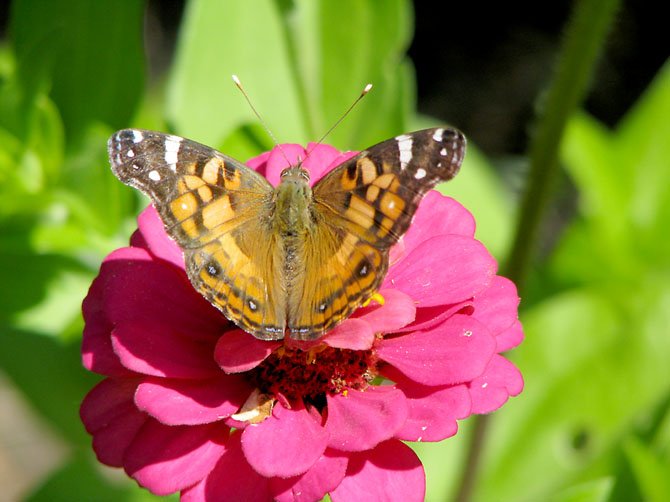 This American Lady butterfly is one of the 28 species of butterflies identified Saturday. Photo Contributed

Do you know the difference between a swallowtail and a monarch? How about a painted lady? Would you recognize these types of butterflies? Following Saturday’s annual butterfly count, organized by Reston Association, the 16 volunteers who assisted with the count are now able to identify the numerous types of species of butterflies that reside in the Reston area.

With temperatures in the 90s and headed toward over 100 on Saturday morning, two groups of butterfly counters, led by the Nature House’s Manager, Katie Shaw, and Reston Association’s Environmental Resources Specialist, Claudia Thompson-Deahl, visited numerous natural, and some not so seemingly natural, areas in Reston. The groups visited garden plots, a meadow near the Fox Mill soccer field, Hunter’s Woods Elementary’s school yard, a small pond in the parking lot of RA headquarters and a garden on the grounds of the National Wildlife Federation’s headquarters.

"Reston has more than 1,300 acres of open space. This butterfly count is a great opportunity to share our open space not just with Reston residents but with folks from around the region. This type of activity also builds a sense of conservation. It shows that people really can make a difference. For example, this year we saw many more monarchs than in previous years. I think this is largely due to people and schools planting milkweed, the sole food source for monarch caterpillars," said Shaw.

"If you don’t take inventory, you will never know what is there," added Thompson-Deahl, referring to wildlife counts which RA, with assistance from volunteers, conducts throughout the year. This information is useful when areas are developed or re-developed or to make residents aware of the natural bounty that is so near their home.

"This type of activity encourages people to go out into natural areas, and it helps us gauge the health of our area," said Thompson-Deahl.

Teri Paglinca of Fairfax participated in RA’s January bird count, after which she said she was able to identify more species of birds. "I am hopeful that after today, I will know more species of butterflies than monarchs," said Paglinca.

SEVERAL VOLUNTEERS are Master Naturalists and participated with the count to maintain their certification. Helaine Krob, who lives in Reston and is a Master Naturalist, said she tries to do community work as close to home as possible. She participated in a previous blue bird monitoring activity. "It’s fun," she said. "And we get to have lunch."

During lunch the group tallied their results. The group counted 380 butterflies of 28 species which ties a previous species record set in 1999 and breaks another record for total number butterflies counted, last set in 2005. It also marks the first time more than 300 butterflies were recorded in a single count.

The NABA Butterfly Count program has been held annually since 1975, when only 29 counts were held. In 2011, 452 counts were held in the U.S., Canada, and Mexico. Volunteers from across North America select a count area 15 miles in diameter and conduct a one day census of butterflies observed within that circle.

THE BUTTERFLY COUNT must be held during at least a six-hour count period within a week before or after the Fourth of July. The count program is intended to promote interest in butterflies and provide results useful for scientific monitoring of this beautiful and fascinating group of insects.