Event will be last at Langley High School. 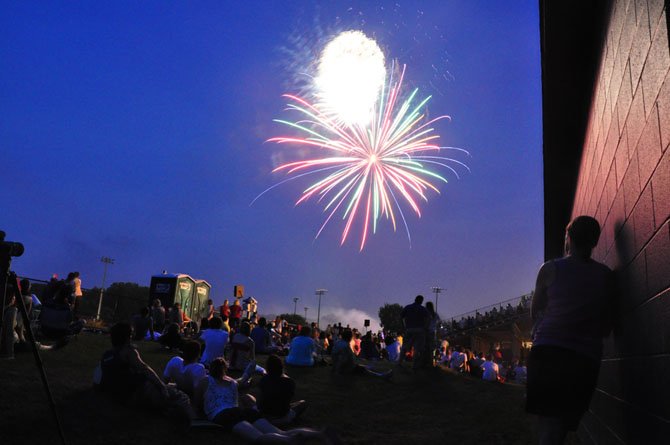 McLean — Hundreds of local residents descended on Langley High School the night of Wednesday, July 4, to the annual Fourth of July fireworks show, hosted by the McLean Community Center. This year’s event was different than years past, both due to the volume of people and the absence of the normal games and activities on the football field. 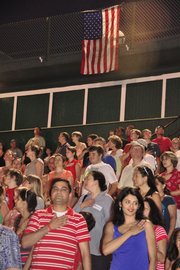 Guests at Langley High School recite the pledge of allegiance before the annual Fourth of July fireworks show.

"Since the Great Falls fireworks were postponed, and we wanted to see a show to take our minds off this miserable week, we decided to try out Langley," said Cameron Shields of Great Falls. "Unfortunately, a couple hundred other people seemed to have the same bright idea."

The Langley parking lot filled to capacity within minutes of the gates being opened at 8 p.m. and attendees quickly parked along nearby neighborhood streets for miles.

"It was a bit of a hike to get here, more than we’re used to, but it was a great show," said Heather Ford of McLean. "I’ve learned to expect big things from this show, and they didn’t disappoint. I think the kids were upset at first about the lack of games, but the show left them, and all of us, in a great mood."

The football field was closed off due to installation of a new field at Langley, so attendees filled the bleachers and grassy sections next to them on both sides.

"We used to love to stake our claim and spread out as a family on a big blanket to watch the show, so it was a bit of a change for us," said Chuck Garfield of McLean. "But it was still a pretty pleasant night to watch some fireworks, we just had to confine ourselves to a smaller spot to fit in, but I didn’t see anyone walk away disappointed."

This was a transitional year for the annual McLean fireworks show, as they will not be held at Langley High School anymore.

"Due to the new fields being put in, this will be our last year at Langley High School," said Glenn Yarborough, commander of American Legion Post 270 in McLean. "While we’ve enjoyed our time here, and don’t have a replacement lined up just yet, I’m sure the McLean Community Center will work something out."