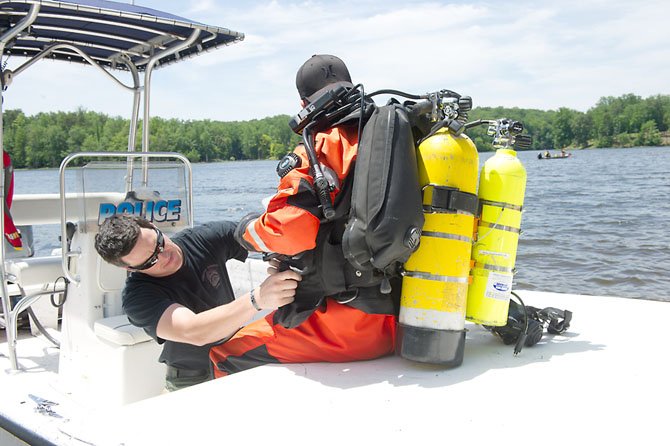 Fairfax County Police Search and Recovery Team divers wear 80 pounds of gear to go in the water. The gear and divers go through multiple safety checks before they dive. PFC Robert Gogan, a member of the dive team and an officer at the West Springfield District adds weights to his colleague’s suit to enable the diver to go to the bottom of the Occoquan Reservoir at Fountainhead Regional Park during a training exercise on June 13. Photo by Deb Cobb. 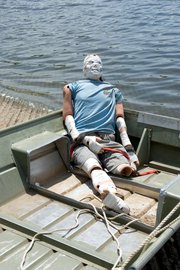 “I just saw a guy’s boat sink in the reservoir, I think he went under with it.”

This fictional 911 call describes the scenario for a joint training exercise between the Fairfax County Underwater Search and Recovery Team, the Fairfax County Police Marine Patrol Unit and the Prince William County Police Underwater Search and Recovery Unit that took place on June 13 in the Occoquan Reservoir near Fountainhead Regional Park: 23 law enforcement officers worked together to locate a dummy representing a body and the boat and recover them from the waters of the Occoquan Reservoir.

Diver is considered the riskiest job in the Fairfax County police department due to nature of the work — underwater, in ever-changing conditions with low to no visibility, low temperatures, and intense physical demands. Says Unit Supervisor Lt. Lance Schaible, “The danger never changes for them whether it is a real-life situation or training.” Training sessions are critical for the unit to maintain skills, develop expertise with new tools, develop familiarity and comfort with different types of recovery operations and to provide newer members of the unit with experience.

“Excuse me, I just wanted to let you know that there is a copperhead sunning itself on the boat launch. You’ll want to be careful,” Chris Couchman of Fountainhead Regional Park told members of the Fairfax County Police Underwater Search and Recovery Team as they were preparing for a training exercise at the park on June 13.

The copperhead snake is a pit viper common to Virginia — and poisonous, although not the most aggressive of the poisonous snakes in Virginia. It is illegal to kill the copperhead unless it presents an immediate threat to one’s personal safety. This snake wasn’t aggressive, but it was basking in a location too close to dive team operations and the boat launch at the park.

When faced with a poisonous snake, it’s good to be with Fairfax County police officers. MPO Mike Nicholson, lead motor carrier detective of the Motor Carrier Unit and 15-year veteran of the Fairfax County Police Underwater Search and Recovery Team fashioned a snake pole from some pvc pipe and a rope and captured and relocated the snake to a less-traveled area of the park to enable the training exercise involving 23 police officers from Fairfax County and Prince William County to proceed.

Two days before the recovery exercise was scheduled to start, two members of the Marine Patrol Unit sank a body and a donated boat in the Occoquan Reservoir just off shore from the boat dock at Fountainhead Regional Park.

On exercise day, after a briefing to review the operation, assign responsibilities, discuss conditions, hazards and review procedures and safety measures, the dive teams suited up while the Marine Patrol Unit deployed their side scan sonar to find the body and the sunken boat. The Marine Patrol Unit uses the sonar to search a grid pattern of the floor of the reservoir based on witness statements about where the victim and boat went down. The sonar provides a detailed view of the floor of the reservoir; it is lowered from the front of the boat and connected via cable to a computer operated by one of the marine patrol officers.

Once the body and boat are found, officers mark their location by dropping a crab pot. The metal of the crab pot lights up brightly on the sonar image and is the starting point for the divers’ entry into the water to recover the body, any evidence, and the boat. Once the location is marked, the MPU sets out diver flags to mark out the area where the dive team will be operating and then heads into shore to offload the sonar and take on divers.

While the Marine Patrol Unit is searching for the location of the body and the boat, the dive teams do dry runs of their missions on shore, planning each step to ensure smooth and safe operations under water.

Once the body is recovered, the Fairfax County dive team starts its operation to recover the sunken boat by attaching lift bags filling them with oxygen and bringing it to the surface. Divers wear about 80 pounds of gear, and each diver goes through a health check and several safety checks before they enter the water.

“Fill your house with pitch black water, have someone move everything around, and then go find the remote,” so dive team member PFC Robert Gogan describes the challenge of searching for bodies and evidence in the murky waters of northern Virginia. While searching in conditions of often zero-visibility, divers must be mindful of hazards such as debris, fishing lines and hooks while carefully searching hand over hand for evidence. The scene underwater is treated like a crime scene, divers work to find and preserve evidence as they recover the body and the boat.

Special lift bags are attached to the boat and then filled with oxygen supplied by an extra tank brought out with the divers. Lift operations are complex and can be extremely dangerous, particularly if heavy objects are being lifted. The first team that lifts the boat during this exercise attaches the lift bags to one end of the boat and then fills them, raising the boat perpendicular to the reservoir floor. This strategy works because the boat is so light. The team also wants to practice a horizontal lift, simulating how they would extract a heavy object, like a car, from the reservoir. They attach lift bags to the front and rear end of the boat and use a manifold system attached to the oxygen tank to fill the bags simultaneously. Once the boat rises to the surface, it is towed in to shore and removed from the water.

Officers stow their gear, clean up the site and then debrief about the operation. Each member of the team gets a chance to talk about things they thought worked, things that didn’t, discuss what they could do differently and identify lessons learned. “You get so much more training value out of things that don’t go the way that you’ve planned — as long as it is safe,” Schaible said about the importance of the day’s exercise,

The Fairfax County dive team is called in to recover drowning victims and evidence like weapons and other articles that have been thrown into bodies of water. The team holds monthly training exercises and plans to train quarterly with the Prince William County dive unit. This is the first time the two units have held a joint training exercise although they collaborate regularly during recovery operations.