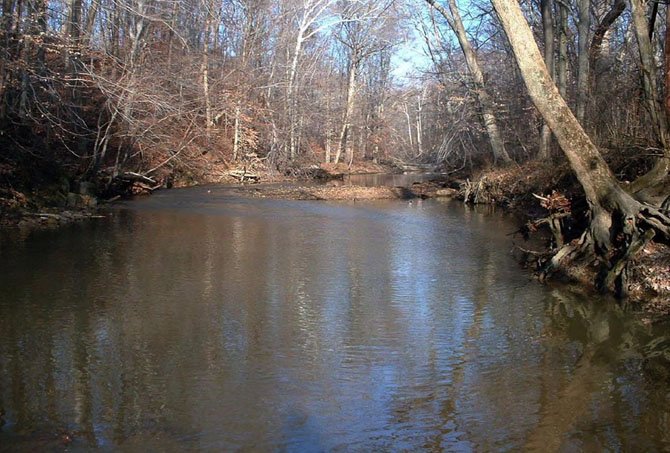 The County has been at odds with the EPA over management of the 52-square mile Accotink Creek watershed for years. Photo courtesy of Fairfax County Department of Public Works and Environmental Services

The complaint, filed jointly in U.S. District Court in Alexandria by Fairfax County and by Virginia Attorney General Ken Cuccinelli on behalf of the Virginia Department of Transportation (VDOT), seeks to halt what county officials deem a "massive expansion" of the EPA’s regulatory power.

County officials claim the EPA’s recent move – to control pollutants in the watershed by requiring the county to further regulate its storm water run off - goes beyond the agency’s "legal authority" under the Clean Water Act (CWA).

"The EPA is way out of control," said Supervisor John Cook (R- Braddock). "We have the best storm water program around, and the EPA’s (actions) go too far."

THE BOARD’S DECISION in a presidential election year to join forces with Virginia’s conservative attorney general – an Obama foe and likely Republican gubernatorial candidate in 2013 – was "politically difficult," Cook said, and shows "just how egregious the EPA’s actions are here."

Board Chairman Sharon Bulova (D-At-large) said the Democrat-controlled board believed putting aside partisan politics and joining the state in the legal action was necessary to strengthen the lawsuit against the EPA.

The County has been at odds with the EPA over management of the 52-square mile Accotink Creek watershed for years. Meeting in closed session during the board’s regular meeting on Tuesday, July 10, supervisors decided to take legal action.

In 2011, according to the lawsuit, the EPA established a Total Maximum Daily Load (TMDL) for Accotink Creek to improve the health of the creek’s aquatic life. Rather than establish a TMDL for one of the pollutants, such as sediment, the EPA issued a TMDL for a surrogate, the flow of water.

"The EPA literally is treating water itself—the very substance the Clean Water Act was created to protect—as a pollutant," the complaint asserts.

According to the EPA, it has approved or established 3,691 TMDLs since 1995 for sediment - the pollutant actually at issue in Accotink Creek.

The Accotink TMDL is one of the first four so-called "flow TMDLs" established by EPA anywhere in the United States. EPA issued the other three flow TMDLs for waterways in Missouri. All have been challenged in federal court.

To comply with the new EPA-mandated thresholds for water flow means Fairfax County and VDOT would have to find ways to further reduce storm water runoff, in some cases by as much as 50 percent.

Meeting these standards is unrealistic, Bulova said, and could cost Fairfax County taxpayers and property owners hundreds of millions of dollars.

VDOT officials estimate its cost to meet its share of the mandated flow reductions would be $70 million or more. To comply with the EPA’s mandates, VDOT officials said they would be forced to acquire significant amounts of private property to build numerous new storm water management structures.

In addition, county officials said they would have to adopt costly and impractical new standards to reduce storm water runoff, and these measures could ultimately cost the county $500 million.

County storm water officials said to achieve 50 percent flow reduction called for in the TMDL rules for a developed watershed such as Accotink, homeowners as well as commercial property owners would be required to capture and retain, or reuse, storm water runoff from their roof, driveway and other impervious areas on their property.

Any new impervious areas, such as home additions or new development, could be required to retain all storm water runoff from any expanded impervious area.

"This topic is extremely important to both developers of future sites and owners of existing sites in the watershed," said Eric Dobson, director of government relations for the Northern Virginia NAIOP, a national trade association for commercial real estate developers, owners and investors. "Our members are very committed to the environment and continuing to do the right thing."

Dobson said the engineers estimate the cost of meeting the EPA’s new requirements, "if even possible to do, is a multiple factor in cost to what is required today."

"We don’t want regulations that set us up for failure," said Penny Gross, the board’s vice chairman and Environment Committee Chair.

"The county believes that a more comprehensive approach will provide the sustainable improvements needed to improve the habitat of our streams and lead to restoration of the bay," Gross said. "We continue to work together with the environmental community, homeowners and builders toward that."

"This is a new type of storm water enforcement action," said James Patteson, director of Public Works and Environmental Services. "While we are not sure why we and a handful of localities in the country were selected, we feel an obligation to other municipalities, businesses and entities to ensure that enacted regulations are fair, attainable and environmentally sound."

FAIRFAX COUNTY’S RECORD includes more than $300 million in wastewater system improvements and dedicated annual funding for storm water system improvements since 2006. In 2009 the county instituted a dedicated tax for storm water and has since increased it to a current rate of $.02 per $100 assessed value, or $100 per year for the median home. The countywide tax funds the $40 million budgeted storm water program in fiscal year 2013.

Bulova said Fairfax County has, for the past six decades, "demonstrated a strong and unwavering commitment" to water quality and environmental stewardship. "However, we believe that regulations, whether federally or state imposed, must effectively address the targeted problem and be fiscally sound and realistic.

"To clean up our streams requires long-term sustainable solutions that will enlist the cooperation of everyone," Bulova said in an email on Saturday. "Fairfax County has demonstrated that we are committed to moving forward. We object to costly regulations that set us up for failure and not get the job done."

Update: Story has been updated to reflect corrected dates for the Board of Supervisors meeting and filing of the lawsuit.