EPA Will Not Appeal Court Decision on Accotink Watershed
Votes

EPA Will Not Appeal Court Decision on Accotink Watershed 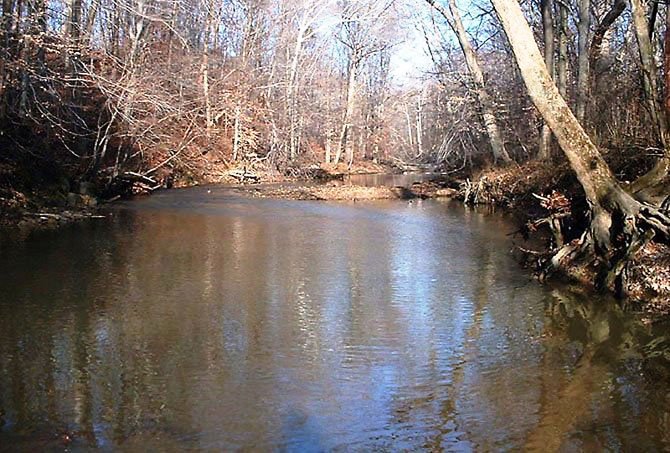 The county has been at odds with the EPA over management of the 52-square-mile Accotink Creek watershed for years. Photo courtesy of the Department of Public Works and Environmental Services

“The [decision] is strong validation of Fairfax County’s sound and successful strategy for addressing our clean water goals.”

The agency’s decision follows a Jan. 3 ruling by U.S. District Judge Liam O’Grady , who struck down an EPA mandate imposing restrictions on the flow of water into Accotink Creek, which could have cost Fairfax County taxpayers as much as $300 million for storm water abatement.

In a nine-page opinion, O’Grady wrote that storm water runoff could not be considered a “pollutant” under the Clean Water Act, “so the EPA is not authorized to regulate it.”

Monday, March 4, was the last day the EPA could appeal the ruling.

“The [decision] is strong validation of Fairfax County’s sound and successful strategy for addressing our clean water goals,” said Fairfax County Board of Supervisors Chairman Sharon Bulova (D-at-large) in a statement released last Tuesday. “Fairfax County remains committed to improving the health of the Accotink Creek as well as other tributaries of the Potomac and Chesapeake in the county.”

The county filed a federal lawsuit in July of 2012 after months of negotiations and talks with EPA officials failed to yield an acceptable compromise, according to county officials. Faced with a regulatory deadline, the lawsuit was the county’s only recourse.

FILED JOINTLY with the state of Virginia on behalf of the Virginia Department of Transportation, the lawsuit claimed the EPA’s regulations vastly exceeded its legal authority and would create a "massive expansion" of the EPA’s regulatory power if left unchallenged.

The board’s decision during the 2012 presidential election to join forces with Virginia’s conservative attorney general, the state’s Republican gubernatorial nominee, was "politically difficult,” and showed "just how egregious the EPA’s actions are here," said Braddock Supervisor John Cook, one of three Republicans on the Democrat-controlled board.

Bulova (D-at-large) said the board believed putting aside partisan politics and joining the state in the legal action was necessary to strengthen the lawsuit against the EPA.

In a statement last week, Cuccinelli said the EPA mandate would have done “more harm than good.”

“Its effectiveness was unproven and it would have diverted hundreds of millions of dollars Fairfax County was already targeting for more effective methods of sediment control,” Cuccinelli said.

The county has been at odds with the EPA over management of the 52-square-mile Accotink Creek watershed for years. In 2011, the EPA decision to define the flow of water as a “pollutant”—rather than sediment, the pollutant actually at issue in Accotink Creek—was the tipping point for Fairfax County.

"The EPA literally is treating water itself—the very substance the Clean Water Act was created to protect—as a pollutant," Fairfax County asserted in its complaint.

To comply with the EPA-mandated thresholds for water flow meant Fairfax County and VDOT would have to find ways to further reduce storm water runoff, in some cases by as much as 50 percent. VDOT officials said they would have been forced to acquire significant amounts of private property to build numerous new storm water management structures.

Meeting those standards was unrealistic, Bulova said. “I am pleased to be able to put this legal battle behind us so we can focus on addressing improvements to our watersheds and water quality.”

She said the Fairfax County has already invested significant resources in developing 30 Watershed Management Plans covering all of the drainage areas in Fairfax County. Each plan includes an assessment of the existing conditions within the particular watershed and 10-year and 25-year project plans for improving and protecting the water quality in each watershed.

FAIRFAX COUNTY’S RECORD includes more than $300 million in wastewater system improvements and dedicated annual funding for storm water system improvements since 2006. In 2009 the county instituted a dedicated tax for storm water and has since increased it to a current rate of $.02 per $100 assessed value, or $100 per year for the median home. The countywide tax funds the $40 million budgeted storm water program in fiscal year 2013.

“Investing in the health of Accotink Creek and other tributaries in Fairfax County not only improves local streams and rivers, it provides downstream benefits to the Potomac River and, ultimately, the Chesapeake Bay,” Bulova said.

"The EPA was way out of control on this," Cook said. "We have the best storm water program around, and the EPA’s actions simply went too far."