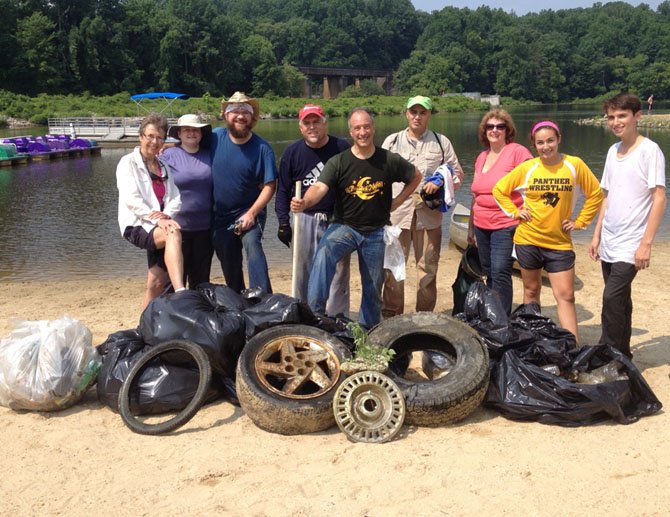 When Meghan Walker paddles a canoe upstream from Lake Accotink looking for garbage, not much surprises her anymore.

“The sky’s the limit for odd trash,” she said. “A big find last time was a wheel and tire -- still attached. That’s impressive.”

Walker lives in Danbury Forest, bordering Lake Accotink, and is president of the volunteer organization Friends of Lake Accotink Park (FLAP). The group’s main focus is improving the lake, park grounds and surrounding trails through trash collection and beautification projects.

Their first water-based cleanup “Raiders of the Lost Trash” took place in July, and another is scheduled for Saturday, Sept. 20. “I personally don’t understand littering into waterways,” said Walker. “I see it in my own neighborhood -- trash off to the side in the woods. It does kind of boggle the mind.”

Walker was also at the first public meeting to discuss water quality in Accotink Creek and Long Branch, held Sept. 10 at the Kings Park Library in Burke. Led by the Virginia Department of Environmental Quality (DEQ), the meeting marked the resuming of a 2007 project that was meant to determine stressors on the Accotink Creek Watershed.

IN ITS BI-ANNUAL water quality study prior to 2007, the DEQ had determined the Watershed to be “impaired” with regards to its ability to support aquatic life. The most basic, tiny organisms -- Benthic Macroinvertebrates -- weren’t surviving. And because those bugs support fish populations and help recycle nutrients, their health is a primary indicator of the health of the creek.

After doing an analysis of the causes -- usually the presence of several pollutants -- the standard practice for the DEQ and any partner organizations is to develop a TMDL, a Total Maximum Daily Load report. This concludes how much of each stressor, or pollutant, a body of water can sustain while still meeting water quality standards.

The DEQ had initially been working with the EPA to put together the Accotink Creek TMDL. They planned to make a case for heavy stream flow, the kind that comes after a rainstorm, being the primary pollutant.

Indeed, according to Kris Unger, the Primary Conservator for another volunteer organization the Friends of Accotink Creek, within an hour of a heavy rainstorm, the creek rises dramatically and gushes with milky-orange sediment. Repeated episodes can erode the sides of the creek and leave sediment suspended in the water, making it difficult for the macroinvertebrates and other wildlife to survive.

On “stormwater walks,” Unger shows people the steep walls of the creek. “It looks like a ditch,” he said, “six feet high, with roots sticking out. People ask, ‘How do they get the bulldozers in?’”

So targeting stormwater flow seemed like an intelligent approach. But the EPA took the lead in developing a flow-based TMDL.

“The idea that EPA had was good,” said Bryant Thomas, the Regional Water Permits and Planning Manager with the regional DEQ office. “But the final product was fairly narrow, and really expensive to try to comply with.”

The EPA’s focus called for finding ways to reduce the flow of stormwater -- no small task considering how water gushes, as planned, to sewers from sidewalks and streets all over the county. That plan discounted the validity of possible efforts to shore up Accotink Creek itself to help it cope with storm flow.

Structural changes to satisfy the EPA were estimated to cost Virginia and Fairfax County roughly $300 million. Then-Virginia Attorney General Ken Cuccinelli and the Board of Supervisors responded by suing the EPA for overstepping its bounds. In early 2013, a federal judge forced the EPA to back off, but that still left Accotink Creek without a functional TMDL for its impaired status. 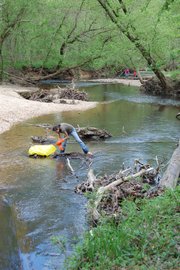 THAT BRINGS UP the meeting last week, where the DEQ and members of a technical advisory committee discussed plans to create a new TMDL. In the first phase of this renewed project, the DEQ, together with Fairfax County, the United States Geological Survey and the EPA, will gather data and create a new list and analysis of creek stressors.

Once that’s approved, they anticipate developing a new TMDL by February 2016. That’s Phase Two. But that report would still predate any concerted state and county action to relieve whatever they determine the specific stressors to be.

In the meantime, change at the community level can absolutely help the waterways. “It can’t all be done by the county just spending money,” said Rosemary Ryan, senior legal aide for Supervisor John Cook. “We’ve got to change how people think about the streams.”

Ryan and organizations like FLAP, FAC and the newly formed Friends of Long Branch believe every little bit of knowledge and action helps, whether it’s coming to a creek cleanup event, thinking twice about using fertilizers or avoiding washing your car in the driveway, where solvents will go straight to the stream.

“Find just one other person who cares” is FLAP’s motto, “and hopefully they will find more people,” added Unger.