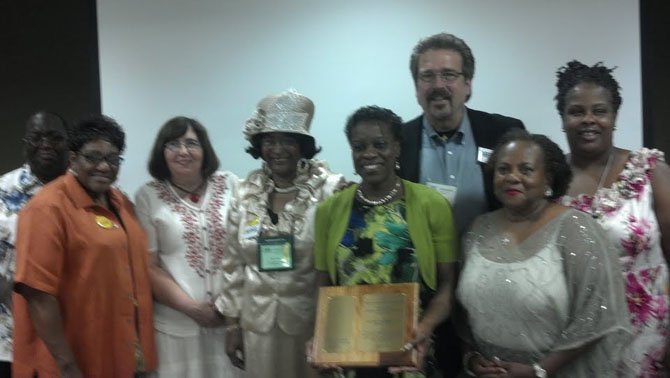 The church, located on Russell Road a mile south of Hybla Valley, is devoted to serving the needy of the Route 1 Corridor according to founding pastor, the Rev. Keary Kincannon. About 8,000 a year are aided by Rising Hope’s food pantry, soup kitchen, clothing closet, hypothermia shelter, recovery programs, job search and emergency resources.

Both awards were made at the June 21-23 Conference of the Virginia United Methodist Church attended by about 3,000 Methodist pastors and lay delegates from every Methodist church in Virginia. The first award, announced at the beginning of the conference, is a monetary award made in the name of the former conference lay leader Shirley Cauffman.

The second is the Bishop Leontine Kelly Peace and Justice Award made by the Methodist Federation for Social Action. The plaque is inscribed, “For 17 years of reaching out in the name of Jesus the Christ to care for and serve those in need along the Route 1 Corridor south of metropolitan Washington, D.C.”

Bishop Kelly, a Virginian, was the first African American woman ordained in any denomination.

Rising Hope was also honored in the conference magazine, Virginia Advocate, with a two-page article in the centerfold.

Before becoming a pastor, Kincannon was a community organizer in Columbia Heights, Washington, D.C., and for 18 years a resident and member of the Christian commune known as Sojourner’s, An Intentional Christian Community. Founder Jim Wallis now publishes the widely-read magazine of Christian social justice, Sojourners.

The Peace and Justice Award plaque now hangs next to a portrait of Christ at Rising Hope. With the Rev. Keary Kincannon are three of the church’s five young interns (from left): Victoria Nagel, Drew Colby and Sherri Ellerbe.

After attending seminary, Kincannon was appointed by Bishop Tom Stockton 17 years ago to start a mission church for disadvantaged people along the Route 1 Corridor. A year later the church was chartered, begun out of the back of Kincannon’s station wagon, then moved to seven different locations before settling seven years ago at its present site on Russell Road. Today, both rich and poor, housed and homeless attend Sunday services.

Another indication of Rising Hope’s influence is its appeal to young seminary interns. Four students from Wesley Theological Seminary are now serving at Rising Hope. Two, Justin Hull and Drew Colby, are studying to be pastors. Two others, Sherri Ellerbe and Felisa Macaspac, are teaching reading and adult literacy.

“Rising Hope is fortunate that we attract so many interns,” said Kincannon. “I am glad so many young people want a Rising Hope experience.”

The church is also hosting a fundraising performance Sept. 16 by the Christian rock band Tenth Avenue North at the Hylton Memorial Chapel at Woodbridge. Tickets are available at http://www.itickets.com/tours/1220.html.

Then in October, also to raise funds, a choir and gospel festival is planned, hosted by Jeff Majors, known for his radio and television shows.

Finally in November is the Gala, which raised $30,000 last year.

Among current programs at the church are restoration of voting rights for ex-offenders and the Summer Fun Club for the young with weekly field trips and games that refresh reading and math skills. Ex-offenders wishing to recover their voting rights should contact Carol Maxwell at Rising Hope, 703-360-1976.

“Here at Rising Hope,” said Kincannon, “we reach out to people who are struggling with all kinds of addictions, all kinds of issues, their lives broken in many different ways. What we are about is empowering people to live life to the fullest, to experience the abundant life that Jesus Christ came to bring.”