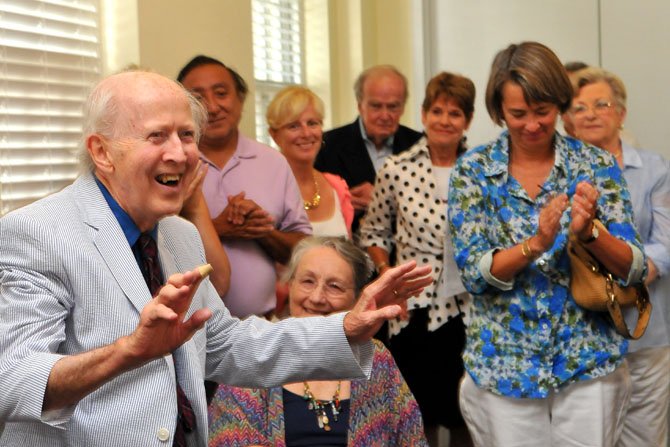 The reception commemorated the dedication of the window in the church chapel in March of 1981. LeCompte was commissioned to create the window for the chapel by Babs and Charles Henry Smith Jr. in memory of their young son William Wellford Smith (1952 – 1968). William was also the great-great- great grandson of Daniel McLean, a founder of St. Paul’s in 1809.

LeCompte who has created stained glass windows for over 50 churches and public building in America has also created and produced over 45 windows and seven mosaic murals for the Washington National Cathedral. He described the window at St. Paul’s as “A tangible sign of tender memories of a gifted and well-loved son who has left his family … a form suggesting a tree trunk as a life rises in the world … a sweep of darker glasses and little blue flames shows the coming of pain and travail, finally of death itself … then a symbol of a doorway of light recalling the gates of larger life of the Prayer Book … new life and new birth in a fresh world beyond the pain of the present. May its transparent depth send meaning and quiet joy radiating out from its dim corner.” – excerpts from volume one of “The History of St. Paul’s Episcopal Church 1809-1984” by Ruth Lincoln Kaye, St. Paul’s historian.