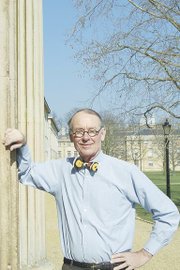 Photo Courtesy the University of Virginia

Perhaps the only tangible link between the Alamo and gothic revival architecture is in the 200 block of South Pitt Street: St. Paul’s Episcopal Church. The 1818 building is not gothic in a formal sense, which would be something closer to the National Cathedral. Originally designed by American architect Benjamin Henry Latrobe, the church was part of a gothic revival period sometimes known as the "Gothick" movement.

&lt;b&gt;What’s the difference between scholarly gothic revival architecture and the Gothick style of St. Paul’s?&lt;/b&gt;

Latrobe was taking certain elements of what was seen as the gothic style such as the pointed arch rather than a round arch and using that for the triple entrance. Then there are the pointed arch windows on the side. Then there are the round rose windows that are up on top of it. It isn’t academic in any sort of a way. He’s just taking a couple of different images that are sort of floating around in his mind or that he’s getting out of a book and he’s applying them to a very standard form of an American church.

&lt;b&gt;Why do you suspect many people have compared the exterior of St. Paul’s to the Alamo?&lt;/b&gt;

Well, the Alamo doesn’t have pointed arches for example. It has round arches on it as I recall. The Alamo was a Catholic mission church, and while I can see the similarity I don’t think they were coming at this with the same ideas or anything like that.

Gothic architecture was seen as architecture of the dark ages. It was what the so-called Renaissance acted against. With the Rand reformation and the Renaissance and the revival of classical architecture and so forth, gothic is confined to the Dark Ages. But beginning in the later 18th century in England, there is a beginning of an interest in gothic architecture. People begin to sort of rediscover it. It was seen in a very nationalistic sort of a sense in that it was very English even if there was a feeling that the English had gone down the wrong road and followed those darn Italians into the Renaissance. So there was a feeling that they should get away from all of that and back to their roots. And that was gothic architecture.

Gothic revival in different variations continued on well into the 20th century. That National Cathedral is gothic revival although it’s a much different kind of gothic revival. Another example in Alexandria would be the Second Presbyterian Church at 601 Prince Street, now EDAW. It was built in 1840, so it’s a good 20 years after St. Paul’s. That’s an example of mid-19th century gothic revival.

&lt;b&gt;How is the modern version of St. Paul’s different than Latrobe’s design?&lt;/b&gt;

The front wouldn’t look that different, with one exception which is that the top of the pediment has been changed and raised up. But the rest of the exterior would look pretty similar. The interior of it is different in some ways. Now there’s a chancel, which Latrobe’s design did not have. Later there was the addition of stained glass. And crosses. You never used to have crosses in church. Most Episcopal churches didn’t have crosses in them until the early 20th century.