If we don't believe that poor students are less innately talented, then the disparities in Northern Virginia are truly unfair.

The numbers are eye-popping.

Latino students are 22 percent of Fairfax County Public Schools students, but 2.7 percent of the incoming Thomas Jefferson High School for Science and Technology freshman class, the class of 2016. Of the 480 students, seven are black. That's 1.4 percent, while black students are 10 percent of the county school system. 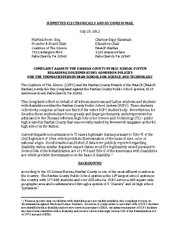 Almost all of the students accepted to TJ come from eight middle schools with advanced gifted-and-talented programs.

The disparities and lack of diversity at Northern Virginia's stellar magnet school, ranked the top high school in the nation, is a symptom of a much more pervasive problem in Fairfax County.

This week, two groups, the Coalition of The Silence led by former school board member Tina Hone, and the Fairfax County Branch of the NAACP filed a formal complaint with the U.S. Department of Education's Office of Civil Rights. The complaint argues that the current policies regarding admission to Thomas Jefferson and policies regarding identification of students for eligibility for gifted services within FCPS “disparately impact Black and Latino students in violation of Title VI of the Civil Rights Act of 1965, which prohibits discrimination based on race, color and national origin.”

For well over a decade, FCPS has made a variety of attempts to address the exclusive nature of admissions to TJ, but with little effect and intense controversy.

GETTING ACCEPTED to TJ, in general, is not an easy task for anyone, reported Julia O'Donoghue in 2010 in the Connection. The school admitted only 15.3 percent of the 3,119 students who applied to be part of the class of 2014. That means TJ had a lower acceptance rate for its incoming freshman class than either Cornell University or Swarthmore College that year.

Fairfax students also compete with children from around the region for slots at the Northern Virginia magnet school. About 80 percent of TJ's student body comes from Fairfax but residents from Arlington, Loudoun, Prince William and Fauquier counties and the City of Falls Church can also apply. (The City of Alexandria does not allow its students to apply to TJ, and should reconsider its choice to opt out.)

While it may be difficult for all children, students who are black, Hispanic or poor have a particularly hard time getting admitted to TJ.

Out of 480 students admitted to the class of 2014, only nine were considered poor enough to qualify for free-or-reduced-priced lunch.

Fully 25 percent of students in Fairfax County are poor enough to qualify for free-or-reduced-priced meals. Do we believe that poor students are less talented than students from wealthier families?

The complaint asserts that FCPS “has evolved into a system that essentially operates a network of separate and unequal schools.”

Many if not most poor students lack access to quality enrichment programs and after-school activities, lack access to expensive and highly specific test preparation classes for the admissions test for TJ. And the complaint cites FCPS retreated from outreach programs for poor and minority students.

Addressing these issues from Kindergarten up would have many benefits beyond increasing diversity at one school. This could also decrease the achievement gap, increase the graduation rate for minority and poor students, and reduce disparities in the suspension and expulsion rate.

These are hot issues with many perspectives. We welcome letters and comments suggesting solutions and with different points of view.