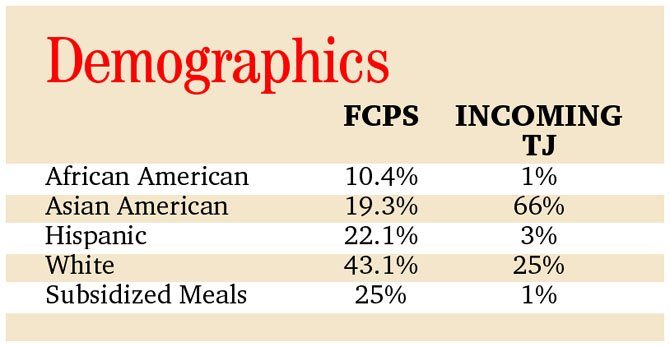 More than 181,000 students attend Fairfax County Public Schools. So why do the 480 students who were accepted for next year’s freshman class at Thomas Jefferson High School for Science and Technology seem so important?

Fairfax County Public Schools have a single elite magnet school, Thomas Jefferson, and TJ is frequently referred to as the top high school in the country. Dramatic disparity in the makeup of admissions at TJ is an indicator of disparity in early identification of students as gifted and talented, of access to advanced classes and enrichment, and in the basic education that the Fairfax County Public school system offers to all of its students.

The local chapter of the NAACP and a group called Coalition of the Silence, led by former school board member Tina Hone, last year filed a civil rights complaint with the Justice Department alleging that FCPS is essentially running “separate-but-unequal” schools systems.

In a statement this month, Hone said there is “stark underrepresentation of Black and Latino students at the elementary and middle school level who are identified as eligible to receive instruction at a Gifted and Talented and/or Advanced Academic Program center. ... Because so few Black or Latino students (or poor students) receive instruction through these centers and because the instruction in these centers is so robust, the pipeline of talented Black, Latino and poor students who are able to compete successfully for admission to TJ is choked.”

The underrepresentation of poor students is in many ways more disturbing than the racial disparities. While the concept of “value added” has been controversial in teacher evaluations (the sample size is too small for that) FCPS could rightly be evaluated on the value added.

Are its top performing schools really based on the value that relatively wealthy families are able to devote to their children’s education? Books, computers, tablets and more at home, enrichment programs and camps, tutors, and attention from well educated parents are the main ingredients to FCPS success.

Perhaps it is best to measure the value added by FCPS based on the performance of its poorest students, the 25 percent who qualify for subsidized meals, and who bring the smallest resources from home to the table.

The School Board has named a new superintendent, pending some final details. She is Dr. Karen Garza, currently superintendent of the Lubbock Independent School District, which serves approximately 30,000 students in Lubbock, Texas. Before that she served as the chief academic officer of the Houston Independent School District, the seventh largest school district in the country with more than 200,000 students. She faces tremendous opportunity here in Northern Virginia.