At Long Last, A Traffic Solution

Braddock/Pleasant Valley intersection to be improved.

Centreville — For years, Fairfax County has wanted to do something to alleviate the traffic tangle that ties up motorists during both the morning and evening rush hours at the intersection of Braddock and Pleasant Valley roads in Centreville.

The congested intersection goes right by Cox Farms near the Fairfax/Loudoun county border. At one time, officials considered putting a roundabout there, but abandoned that idea when it became increasingly clear that the cost to do so would be astronomical.

But now, thanks to the efforts of the Loudoun County Board of Supervisors and some members of the General Assembly from both counties, the estimated $2.6 million needed to improve that intersection by a different method is finally available. 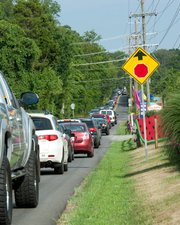 This photo is taken from the Cox Farms corner of the intersection looking eastward down Braddock Road, during the evening rush hour, Wednesday, July 11, around 5:30 p.m. Traffic was heavy both westbound and eastbound.

The request included the $600,000 in immediate funding required for road engineering, plus a $1 million match of Loudoun’s dollars from VDOT’s Revenue Sharing Program. But it was all just a hope until June 20 when the Commonwealth Transportation Board (CTB) greenlighted the project by approving the $600,000 and placing that intersection in its Six-Year Improvement Plan. Those actions set in motion the VDOT match.

“The $2.6 million should cover it,” said Ramadan. “But we’ll know the exact cost better after the engineering work is done — hopefully, by the end of the year.”

Calling it a “collaborative effort,” he said he and Hugo, LeMunyon and Black worked with VDOT and Deputy Secretary of Transportation David Tyeryar for “several months” to obtain the necessary state funding. Ramadan also praised Letourneau and his colleagues for approving Loudoun’s portion of the pot. “I feel fantastic,” he said. “A great thank-you goes to the Loudoun Board of Supervisors for funding a project outside the county.”

In a press release from Ramadan’s office, LeMunyon stated that he’d testified twice before the CTB, seeking funding to redesign the intersection. Doing so, he said, will “reduce the congestion and get both Loudoun and Fairfax county residents moving.” Agreeing, Hugo said he looked forward to the successful completion of “this important transportation project.”

Currently, both Braddock and Pleasant Valley roads there are one lane in each direction. “But they’re small lanes, so they’ll be widened,” said Ramadan. “We’re also going to be enlarging that intersection with turn lanes and a light.”

Step one, he said, will be designing the specifics of the intersection and doing all the engineering work, including studying traffic patterns there. Then VDOT will build it. “Once the engineering is done, I’d like to see this project begin in 2013, if possible, 2014 at the latest,” said Ramadan. “That’s the goal.”

He said it felt wonderful to be part of a joint effort between the counties and state for something so worthwhile. He also noted that the improved intersection can’t come soon enough for him.

“I’ve lived in South Riding for 13 years, so I know the need for it,” said Ramadan. “And I hear about this intersection all the time from my constituents.”

In a phone interview, Hugo gave all the credit to Ramadan, but was only cautiously optimistic about the project’s outcome. “We want to make sure it improves safety within the intersection,” he said. “But we also want to be very careful that it doesn’t negatively impact the quality of life in Virginia Run by overburdening Pleasant Valley Road.”

Still, Ramadan believes that whatever happens there has got to be better for everyone than the way things are now. As far as he’s concerned, “Fairfax County needs to send Loudoun County a thank-you note.”