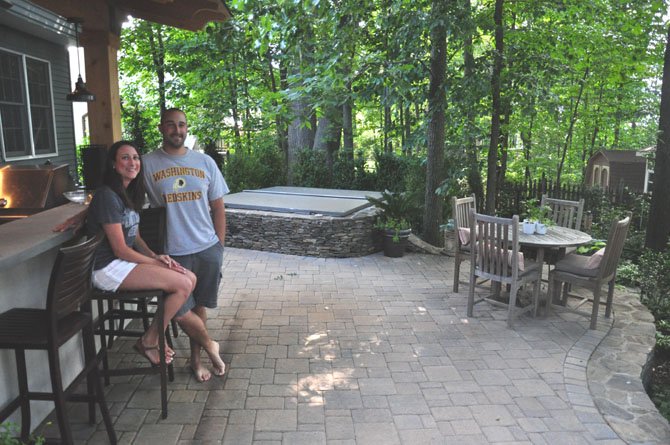 Nate and Michele Ament, who live on Young Dairy Court, will be one of the stops on this year’s Herndon Garden Tour, which will take place Sunday, June 24. Photo by Alex McVeigh.

Herndon — The Town of Herndon’s Cultivating Communities initiative will host their annual Garden Tour Sunday, June 24 from noon to 4 p.m. The tour will feature five different stops within the town borders, all representing a variety of approaches to suburban residential gardening.

"There will be a variety of looks at gardens, and they’re all ones that don’t require huge yards," said Diane D’Amico, committee chair for the tour. "People tend to enjoy seeing how realistic it is to put a beautiful garden in a regular neighborhood, you don’t need a sprawling property in Middleburg."

As landscape architects, Nate and Michele Ament know what they like to see in a garden. But years of living in a Reston townhouse didn’t allow them to reach their full potential. Once they moved into their house on Young Dairy Court two years ago, they immediately set to work, adding gardening beds, a deck, bar, hot tub and water feature to the property.

"We wanted to present a lot of different textures and have the plants cycled so they bloom throughout the year," Michele Ament said. " 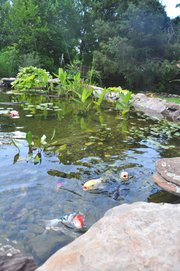 A pond with koi in the backyard garden of David Boldt and Lorna Schmid, one of five stops on this year’s Herndon Garden Tour.

Nate Ament says they didn’t want to take down many trees, opting instead to go with pockets of plants that love the shade in the backyard, along with the water feature.

THE COUPLE used a lot of throw-aways from their business, and searched around for bargains on other items, like the chairs at the bar. Other than a little pruning, they say their plants are mostly maintenance free.

"What’s been fun is the other neighbors have seen what we’ve been doing and started doing gardening themselves," Michele Ament said.

This summer will be the first with their back yard fully complete, so the Aments are looking forward to college football season and a lot of entertaining throughout the season.

Husband and wife David Boldt and Lorna Schmid did a bit of gardening while living in a townhouse. When they moved to their house on Monroe Street more than 10 years ago, they began some basic gardening and now the property has evolved by leaps and bounds.

Known as "the magic kingdom," their yard contains a number of plants that won’t often be found in the area, including cacti, a fig tree, banana trees and more. Many of the features came about naturally, such as one section of the front yard with a new maple tree (the result of a stray acorn from a tree down the street) and a fallen piece of tree, the result of a storm a few winters ago.

"We probably get hundreds of catalogues and we’re always looking for something new to try out," Boldt said. "We had a good winter, a lot of plants, like the windmill palm, didn’t die back the way they have during worse winters."

THE PROPERTY is a certified wildlife habitat, and its most prominent feature is a water feature, a stream leading into a pond that is stocked with koi and one perch, which aren’t immune to local predators.

Banana trees and a solarium in the backyard garden of David Boldt and Lorna Schmid on Monroe Street, one of the stops on this year’s Herndon Garden Tour.

"We’ve had a heron that has been coming to the pond and taking the fish," Boldt said. "We set up a defense system, sprinklers with motion detectors, which worked for a while, but I think he’s starting to get used to it."

Schmid and Boldt added the pond about four years ago, as well as a solarium attached to the house where they house a few of the more delicate species.

"We’ve got a few kinds of cactus, and some other plants that do much better in here than they would outside," Boldt said. "We also had the edge built with brick on top of sand, and with a draining system, so we don’t have to worry about any sort of water damage."

D’Amico says the garden tour is popular for gardeners looking for inspiration.

"There’s a lot of plant exchange, and swapping of ideas," she said. "The gardeners themselves will be at home, along with members of Cultivating Communities, so visitors can ask any questions they like."

Tickets are $10 in advance and can be purchased at the Herndon Community Center (814 Ferndale Avenue), the Herndon Florist (716 Lynn Street) and ArtSpace Herndon (750 Center Street). They can also be purchased for $15 on the day of the tour from the community center and ArtSpace.