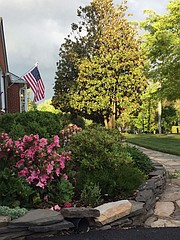 Tickets are $15; children 12 and under are free. Tickets may be purchased at the Herndon Community Center, 814 Ferndale Ave. and Herndon Florist, 716 Lynn St.

The self-directed tour showcases five distinct gardens in Herndon. Tickets will have the addresses of the five stops on the tour.

“Although all the plots echo the lives and hands of previous owners, the current homeowners seem to have a common bond,” according to the committee members Mercia Hobson, Cathy Lanni and Tooran Shadman. “As stewards of their legacy lands, each has removed diseased trees and invasive plants, replacing them with native shrubs, trees, flowering forbs and vines, Winterberry, sweet bay magnolia, wild strawberry and wisteria flourish.”

Plein Air Painters Lorrie Herman and Vicki Vidal Blum will have their easels on display at two of the five gardent on the tour; live music will be offered at another; and Under The Olive Tree purveyors will offer olive oil and vinegars at an additional garden.

Each of the gardeners will be available to discuss the Mayors for Monarchs project, kicked off at Runnymede Park last Wednesday, May 25. Mayor Lisa Merkel signed a pledge for Herndon to take community, private and public efforts to help rejuvenate the dwindling monarch population.

The Herndon Garden Tour is produced by the town's Cultivating Community Initiative, a group of volunteers dedicated to neighborhood beautification and community spirit.

The Gardens of Robin Ward: A Good Steward of the Land

Robin Ward has been on Mosby Hollow Drive for 18 months. “I am fortunate to be able to have acquired such beautiful gardens and I hope I can be a good steward of the land for its former owners, Phil Goetkin and Diane D’Amico,” according to Ward.

She wrote about her garden for the Tour.

“We found veggies were not our calling. The next season we turned the plot into a flower garden to be seen from our upstairs bedroom window,” according to Ward.

“Phil and I ventured out to nurseries and pored over magazines. We took classes. Many classes, and we learned. As you wander through the gardens, you will notice we used reclaimed materials or stone for the hardscape. They blend seamlessly among the plantings, allowing the flora to take center stage,” according to Ward.

“Our hobby evolved into a labor of love and a passion,” said Ward, who is willing to share her successes as well as the failures that “ended up in the compost bin.”

“Gardens were never formally placed, but evolved into a living tapestry of colors.”

The Beebe Family Gardens: All the Things Children Love

George and Sarah Beebe made their garden a family affair.

“We have fun watching the hummingbirds drink the nectar in the coral-bells and the butterflies and bees flit from the Echinacea plants to the black-eyed susans. Our little garden is something that brings our family together. It gets even better year after year,” according to George and Sarah Beebe.

When they moved into their Herndon home on Van Buren Street, “there were some azaleas in the front of the house and a beautiful little deciduous magnolia, but nothing else.” They called a third of the backyard “thick thorny brambles.”

Trips to the quarry, the garden center, and additions of hardscape, new crepe myrtles and lots of plants helped them “reclaim that land and turn it into a space for the children to play,” they wrote. “The plantings in the back reflect all the things that our children love to see and learn about,” including a butterfly garden, rose garden, veggie and herb garden, pumpkin patch and fairy garden.

Stephan Briggs and Deborah Gudelsky: ‘With Glass of Good Wine’

When Stephan Briggs and Deborah Gudelsky bought their home on Grant Street in 2006, the “garden” consisted of mature trees and a raspberry patch.

“We first began our gardening by cutting out flowerbeds around the house and privet hedge border,” they wrote. They filled spaces with perennials and native plants.

After they enlarged the basement in 2009, they used dirt excavated under the house for “the bedding for the organic vegetable garden.”

“We are very proud of the self-design of our gardens with an abundance of flora for many to enjoy,” they wrote.

“The beauty of the gardening process makes us feel more alive. It provides a wonderful sense of accomplishment. Gives us great exercise, and it relaxing to admire at the end of the day… with a glass of good wine.”

Mercia Hobson, of the Garden Tour committee, formatted their words into a poem in this year’s Garden Tour brochure, that also serves as a ticket to the tour.

Al and Mercia Hobson: One with the Huge Magnolia

The Mayors for Monarch pledge envisions such gardens that Mercia Hobson said is unified by American boxwoods.

“Butterflies abound in the gardens and attract monarch butterflies. It’s a rather unexpected mix, Al’s formal traditional shrubs and my cottage farm-style floral. Yet it all seems to work,” says Mercia Hobson.

Their land, easily identified says Hobson, was part of the 100-year-old Bready dairy farmlands, two blocks away from Herndon’s Historic District. “People say it’s the one with the huge magnolia tree,” according to Hobson.

Fred and Jody Krazeise didn’t know if they were going to be able to grow anything on their land on Vine Street because a chemical called juglone from all parts of the 60 black walnut trees.

“We originally tried to save some of the trees, but they were diseased and we decided to have them removed about seven years ago,” they wrote. “So we ground out each of the tree stumps and the soil remained fallow for the next year with the hope that nature would help us cleanse the soil. Thankfully, it did and our vision for reclaiming the space began to emerge.”

They grow two varieties of tomato, eggplant and squash plants and three varieties of sweet bell pepper and cucumber plants. “New this year will be asparagus and potato,” they wrote.

The Herndon couple landscaped their front yard “to require minimal maintenance,” with a dominant white oak in the center, two Galaxy Magnolias near the driveway and a “dragon lady” holly tree next to their front steps.

“Our house, which we built on a vacant lot in 2002, is a replica of a turn-of-the-century farmhouse. Since the lot itself is only 55-feet-wide, we modified plans from a New Orleans-style shotgun house. People are amazed to see how far back onto the lot the house seems to go.”