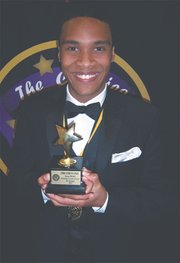 Arlington — H-B Woodlawn High won a Cappie trophy at Sunday night’s 13th annual Cappie Awards at The Kennedy Center in Washington, D.C. Senior Kamau Mitchell received the honor June 10 for Comic Actor in a Play for his school’s production of “The Foreigner.”

“This is insane; it’s hard to believe,” said Mitchell. “I’m truly blessed. I stayed confident, though. I expected the worst, but hoped for the best.”

Following graduation, he’s headed to Howard University to major in Musical Theater in the Bachelor of Fine Arts program.

Overall, Westfield High won the most Cappies, garnering 10, including Best Musical, for “Crazy for You.” The Best Play winner, McLean High, took home five awards, including Lead Actor and Lead Actress in a Play for its production of “A View from the Bridge.”