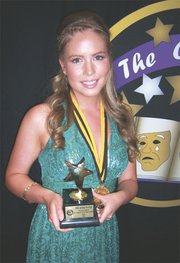 “I’m really excited and kind of shocked because everybody’s sort of a winner at the Cappies,” she said. “I’m just honored to be chosen to be at the Cappies with so many amazing people.”

Coffield believes her performance stood out to the Cappies critics because “I did anything and everything in this role. I didn’t have a limit with what I could do with my character — nothing was too weird or embarrassing.”

Overall, Westfield High won the most Cappies, garnering 10, including Best Musical, for “Crazy for You.” The Best Play winner, McLean High, took home five awards, including Lead Actor and Lead Actress in a Play for its production of “A View from the Bridge.”