Readying for Relay for Life
Votes

Readying for Relay for Life 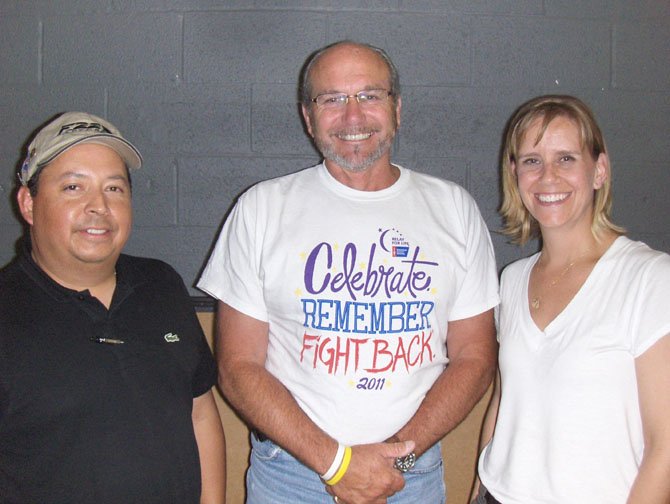 From left: Michael Segovia, Bill Hamm and Jackie Katounas are three of the more than 200 people who’ll be walking in Saturday’s Relay for Life fund-raiser at the nZone in Chantilly. Photo by Bonnie Hobbs.

Chantilly — Bill Hamm was 10,500 feet up, elk hunting in the Colorado Rocky Mountains in 2006, when he discovered a lump on his throat. He’d thought he was healthy; but the lump was a swollen lymph node and, six months later, he was diagnosed with stage IV throat cancer.

“I hadn’t smoked in 16 years when this happened, but the damage was done,” he said. “I went through surgery, chemo and radiation and was a pretty sick puppy for awhile.”

The good news is that Hamm, of Centreville’s Green Trails community, survived. And this Saturday, June 9, at noon, he’ll be the keynote speaker at the opening ceremonies of the Relay for Life at the nZone, 14550 Lee Road in Chantilly.

The event raises money for the American Cancer Society (ACS) for research, plus patient services and programs. Chantilly’s relay currently has 221 participants on 23 teams, but people may also sign up Saturday on site and join the effort. The cost is $10, and each walker receives a T-shirt and may join a team or walk by themselves.

The course is a quarter-mile loop inside the nZone sports facility, and participants will take turns walking. Some 50 survivors will walk the first lap at 12:30 p.m., followed by caregivers doing the second lap. Then all the teams will start.

One of the most moving parts of the event is the 9 p.m. luminaria ceremony. The names of all the people written on candlelit luminaria bags will be read and cancer survivor Lisa Jones will speak.

Yet although it has a serious purpose, the event is actually a fun-filled day for the whole family. There’ll be live music, food concessions, dance and Karate demonstrations, a “Mr. Relay” contest, cheerleaders, Zumba instruction, massages, Bingo, scavenger hunts and a mommy boot camp — exercises for mothers with children.

In addition, a children’s area will have games, moonbounces, movies and snacks. It’s $5 for the whole day and all the food the children can eat. On-site child care will also be available from 1-5 p.m. All proceeds from the children’s area, child care, concessions and massages will go to the ACS.

There’ll also be on-site fund-raising via sales of craft items and baked goods. Since it’s an overnight event, movies will be shown at 12:30 a.m. and 4:30 a.m. The closing ceremony will be Sunday, June 10, at 5 a.m.

HAMM IS CAPTAIN of a team of about 15 cancer survivors. It’s his third year participating in the relay and his second year on this team, appropriately called, “Still Alive & Kickin’.” And he’s especially looking forward to both the survivor and caregiver laps.

“It’s a rough road and you can’t do it by yourself — caregivers are a big deal,” he said. “You’re worried about dying, so you need someone to be with you and help guide you through. I’d just gotten engaged when I found the lump, and we got married sooner because of it.”

Three years ago, Hamm was invited to walk in the relay’s survivors’ lap. “I’d never done the relay before, and I was touched and impressed by it, the way people all came together. I liked their passion and hearing everyone’s stories, and it’s a good way to give back. I figure the reason I went through all this was to give back.”

He said everyone on his team has either had cancer or knows someone who has, and many of them have been caregivers. “So we’re excited that this year they’ll be recognized by a lap at the relay,” said Hamm. “Sometimes, they suffer as much or more than the people going through the treatment.”

Since his own cancer battle, he’s become a born-again Christian, participates in support groups and counsels people. “I try to be an inspiration,” he said. “That’s my purpose in life — to help other people.”

Also participating in her third relay is Jackie Katounas of Centreville’s Confederate Ridge II community. On Christmas Eve 2008, her husband Mike was diagnosed with stage III testicular cancer. He underwent a year of treatment, plus several surgeries, before being declared cancer-free.

So they began walking in the relay in 2010. “It was our turn to do something in return,” said Jackie Katounas. “We felt lucky, and it’s what drives me to do more and more every year. The relay brings together the survivors, caregivers and everybody involved. And it lets us share how grateful and hopeful we are that someday a cure will be found and people won’t have to go through what we did.”

Their 12-member team, comprised of family and friends, is called, “Sometimes You Feel Like a Nut,” and has already raised more than $10,000. “We’re now trying to get people to buy luminarias in memory of loved ones and in honor of caregivers,” said Jackie Katounas. To do so, go to www.centrevillerelay.org; contributions may be made there, too.

“The luminarias are a huge part of the event,” said Jackie Katounas. “They light up the whole night, and it makes for a beautiful moment.” In the past, this relay has been held outdoor on Centreville High’s football field. This time, it’ll be indoors so, said Jackie Katounas, “We won’t have to worry about the weather. Every day, we’re touched by stories of someone with cancer. So we’re excited to be part of something bigger than us, and trying to make a difference feels really good.”

Michael Segovia works for Quest Diagnostics Nichols Institute in Chantilly’s Westfields Corporate Center, and his company encourages its employees to raise funds for charity and help their communities. The ACS is also Quest’s national charity, and this will be Segovia’s fifth or sixth relay.

“We have 35 people on our Team Chantilly so far and hope to have more,” said Segovia. “The company pledged a $20,000 donation and we’ve already raised an additional $5,000 through an international food tasting, bake sales, a chili contest and team T-shirt sales.”

But, he said, “I’m really doing this because it’s a fantastic opportunity to support this worthy cause. The relay’s a chance to not only focus on the disease, itself, but also to raise awareness and money for research and a cure.”

Besides that, said Segovia, “It’s a really fun event and I like the energy all the adults, teens and kids bring to it. It’s amazing that they all have this same focus of charity. And I know this is only a small percentage of the people who can and do give, so it’s very heartwarming.”