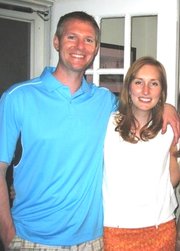 Mr. and Mrs. Bill Mueller of Clifton are happy to announce the

Will graduated from the University of Virginia in 2000 with a Bachelor's Degree in Finance and received his Master's Degree in National Security Policy from the Naval War College in Newport, RI. Will is currently stationed in Norfolk, Va. working as a Training Officer.

Ramona graduated from the University of Texas at Austin in 2000 with a Bachelor's Degree in Public Relations and is currently employed with AgustaWestland North America in Reston, Va. She is the Senior Manager of Communications.

An October 13, 2012 wedding has been planned at the Fort Belvoir Officer's Club in Virginia.