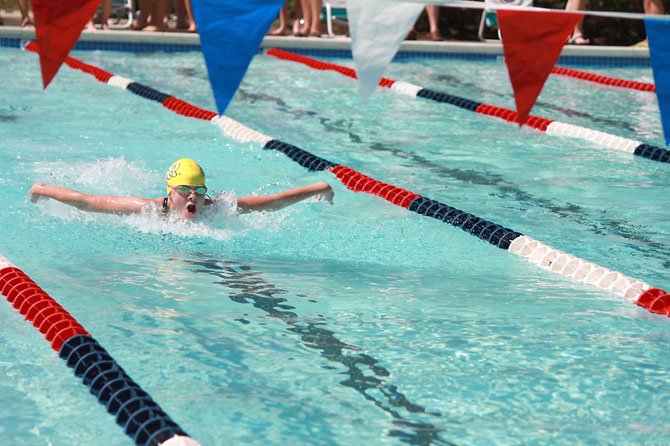 Siena Shannon of Lake Newport goes all out in the girls' 13-14, 50- meter butterfly. In one of the biggest surprises of the day, Lake Newport defeated defending co-champion Lake Audubon. Photo/Courtesy RSTA

Reston — The sun shined brightly last Saturday morning as hundred of swimmers gathered for the first meet of the Reston Swim Team Association's (RSTA) fortieth season. And while the first meet brings back old friends and introduces new swimmers to the joy of the ‘summer season,’ for those that have been associated with RSTA for any length of time this season opened with a bitter sweet feeling because an ‘old friend’ wasn't there to share the good times.

Kim Klarman, past president of RSTA, who was involved with the league in some way, shape or form for 18 years, died last February.

"Kim embodied everything that we in the league strive for," said Gail Romansky, close friend of Kim's and current president. "She reveled in the way that the league brought kids together - not just for a good time but for the lifelong lessons that it taught - teamwork, good sportsmanship and compassion. She was truly an inspiration to the board members, team managers of RSTA and to the swimmers as well. She is sorely missed, but I believe she would be proud of the way we have carried on without her."

Against this backdrop, a moment of silence was held for Kim at each of the RSTA meets immediately preceding the playing of the National Anthem. Following that, the season began - with the focus exactly where Kim would have wanted it; on the swimmers.