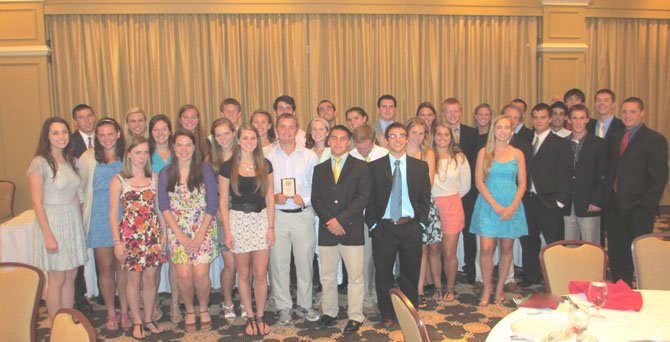 Thirty-four former VYI athletes each received $1,000 college scholarships. Seven $250 gifts were made to MVPs, all of whom were also academic scholars. Students represented Vienna-area high schools as well as regional private ones.

VYI sponsors football, basketball, wrestling, lacrosse, cheerleading, track and field, cross-country, rugby and volleyball. The scholarship program began in 1997 with a $4,500 budget. In 2012, the Board of Directors assigned up to $36,000 for scholarship awards. Over the lifetime of the scholarship program, VYI has awarded over $400,000.

"Whatever you go on to do, become a person of integrity," said guest speaker, Jennifer Heiges, Marshall Road Elementary School principal. "Use what you’ve learned in Vienna to make the world a better place."

From the podium, VYI president Robert Forbes acknowledged the dedication of Board members, working to make VYI the outstanding sports program it is today. A special nod was given to VYI Scholarship Chairman, Bill Cervenak, a Vienna sports institution.

Schmitz was given the Jonathan Forde Memorial Award by Forde’s family. Twenty-six year-old Staff Sgt. Forde died of meningitis in August of 2007 while serving as a combat engineer in the U.S. Army. He played lacrosse with VYI and as a student at Gonzaga High School. He was in training for his second tour in Iraq when he took ill.

To be eligible to apply for VYI scholarships, students must have met specific requirements: having played VYI sports for a minimum of three seasons, a minimum GPA of 3.0, good character, community service, and a reference.

"Use your heart as well as your mind," said Heiges. "Make good choices today and every day."