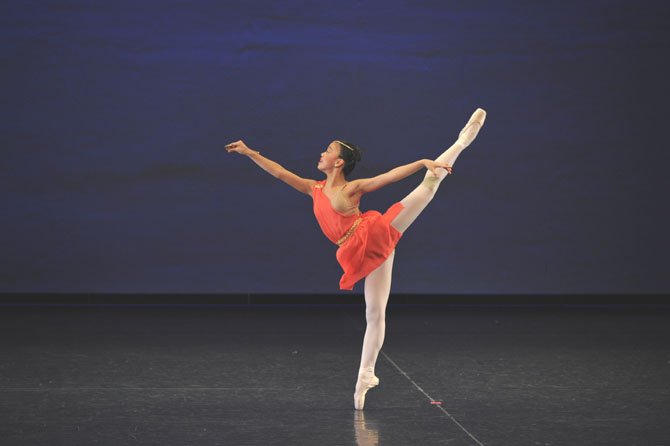 Grace Cho performs at the January 2012 Youth America Grand Prix. Grace portrays the goddess Diana the Huntress in a variation from the ballet "Diana and Acteon." SIGGUl / Visual Arts Masters

Reston — Grace Cho, 13, has been dancing since she was four years old. The Reston resident says dancing is how she likes to express herself.

"It’s a way to express myself using just movements, no words," she said. "It’s about conveying a message, trying to show my character and personality."

Cho, a student at Langston Hughes Middle School and student at the Classical Ballet Theatre in Herndon will be spending her summer in Miami, as she was awarded a full scholarship to the Miami City Ballet for a summer program. She said she is hoping to learn more fundamentals about techniques.

"Learning more basics and technique is important so you don’t get injured," she said. "I also hope to learn more about the artistry as well as more facial and upper body expressions." 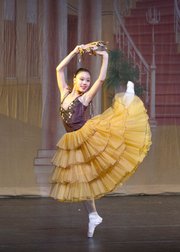 Grace Cho performs at the January 2012 Youth America Grand Prix. Grace portrays the goddess Diana the Huntress in a variation from the ballet "Diana and Acteon."

While she’ll be spending several weeks in a place known for fun in the sun, it will be mostly work for Cho, who will train six days a week while at the program.

This has been a banner year for Cho, who placed well at the 2012 Youth American Grand Prix in Philadelphia, placing second overall for her contemporary performance and a top-12 finish for classical ballet. She credits her teachers at CBT for aiding her development.

"I think it shows how good the training at CBT has been, and how much I’ve grown as a dancer while I’ve been there," she said. "I think it also is a good sign of how we fare against other dancers outside of Northern Virginia."

At the Classical Ballet Theatre, Cho has also been using her experience to teach the younger students, which she enjoys.

"I love to assist the teachers, the students are so cute and they really have fun learning," she said. "I smile every time I tell them about something like proper first position, and to see them work hard to connect and then finally understand it."

Her mother Miho Sato says dancing has helped her daughter learn the importance of setting priorities so she can do her schoolwork before dancing. Sato said her dancing takes up much of her free time as well.

"On her days off she goes to her ballet friends’ houses and practices dancing and choreography and tries on costumes," she said.

"I love how hands on the faculty is, they’re passionate, thorough and professional while being very respectful," she said.

While Cho has accomplished much on the dance floor, she says her ultimate goal is to be part of a professional company somewhere. Her years of dance have taught her that the skills don’t come easy, but they are worth the work.

"It doesn’t come right away, it takes a lot of time, discipline and training," Cho said. "And it’s important to never stop learning, no matter how long you’ve been doing it, because you can always get better."