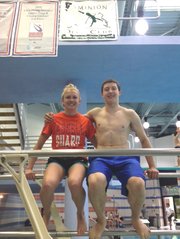 Stockton just finished her freshman year at Virginia Polytechnic Institute and State University (Virginia Tech) under Ron Piemonte. At Olympic Trials, she is representing Dominion Dive Club and head coach John Appleman due to the fact that she qualified for the event while still a member of the team in 2011. Stockton won a Virginia State Championship during her time at Fairfax High School and was also a finalist at multiple USA Diving Junior and Senior National Championships.