Even in Closed Cases, Police Maintain Culture of Secrecy
Votes

Even in Closed Cases, Police Maintain Culture of Secrecy

Public must rely on information police agencies choose to share, even if it's wrong.

Hailu Brook did not have a handgun, although the Arlington County Police Department press release issued the day of the shooting said he did. Graphic by Lawrence Foong/Connection Newspapers 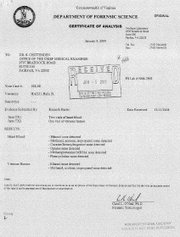 This story is part of a project between the State Integrity Investigation and WAMU 88.5 News.

In December of 2008, Fairfax County police officers chased 19-year-old Hailu Brook across the county line into Arlington and shot him dead. Arlington County Police officials says Brook, a senior at Yorktown High School, robbed a BB&T in McLean, and Fairfax County officers chased him in across the county line. A press release issued later that day by the Arlington Police Department said that the teenager was holding a handgun, a fact that later turned out to be untrue.

"It was a weapon that appeared to be a handgun," said Arlington County Police Chief Douglas Scott.

The autopsy report indicates that Brook was shot by three different officers, who unloaded 20 to 25 rounds into the teenager. He was struck in his left eye, right arm, left buttock, right side of his chest and left thigh. As it turns out, he was holding an airsoft pistol, not a handgun. When asked if the press release should have been worded differently, Scott was clear.

"No," the chief responded. "We don't usually go into that level of detail in a press release."

ACROSS VIRGINIA, there are almost no details available to the public about crime that happens every day. From petty larceny to murder, Virginia police officials routinely deny access to basic documents such as incident reports. In the case of Hailu Brook, his father Brook Beshah can't even get a copy of the investigation conducted by Arlington County officials detailing how Fairfax County police officers shot and killed his son — even though the case is closed.

"I wish they were more transparent. Definitely," said Brook. "Transparency wouldn't kill anybody. It is only when we have transparency that we will find accountability."

When the Associated Press tested the effectiveness of the Virginia Freedom of Information Act in 2006 by sending reporters to each county to ask for public records, only 43 percent had success. The rest were told that the records would not be released or would cost thousands of dollars in fees. Earlier this year, a State Integrity Investigation ranked and graded each of the 50 states on government accountability, transparency and corruption. Virginia got an F, largely because police agencies use an exemption clause in the Virginia Freedom of Information Act to withhold basic documents in all cases, regardless of what the case is about and regardless of whether the case is open or closed.

THIS WEEK, law enforcement leaders and advocates for open government will meet in Richmond to consider the fate of Senate Bill 711, originally introduced in 2010 by state Sen. John Edwards (D-21). The effort has languished for years as police chiefs and prosecutors from across the commonwealth have spoken out against any effort to undermine their broad power of exemption, which includes withholding "complaints, memoranda, correspondence, case files or reports, witness statements, and evidence relating to a criminal investigation or prosecution." The bill currently under consideration would add the words "ongoing investigation" to that list, allowing for the public release of documents in closed cases such as the one conducted by the Arlington Police Department about the death of Hailu Brook.

"There's no policy reason why they should remain confidential once the case is over," said Edwards. "My bill even allows law-enforcement officials to shield confidential informants or techniques that are considered confidential."

Police chiefs, sheriff's deputies and prosecutors disagree. During a hearing conducted by a subcommittee of the Virginia Freedom of Information Advisory Council in 2010, law-enforcement officials from across the commonwealth descended on the capital to oppose any effort to weaken the exemption clause. Even if a case is closed, they said, releasing documents would be a bad idea. Now, two years later, the same subcommittee is set to meet yet again to consider the same legislation.

"We're still trying because we think this is an area that needs attention," said Ginger Stantley, director of the Virginia Press Association. "We've targeted this as one of the large concerns we have with our open government laws, and we're going to stay with this because it's important to our members."

EVEN FOR FAMILY members of crime victims, documents are routinely withheld by police agencies. One example is the 2009 murder of 19-year-old Kossi Djossou, who was shot at the Gold Crust Bakery in Alexandria. After the murder, the Djossou family tried to find out what had happened. But their repeated attempts to get documents in the cases were denied.

"How can something happen to your son, and you’re never going to know the facts?" asked Geoffrey Josseau. "I can’t explain to the people back home what happened."

Virginia law that allows police agencies to withold information from the public also allows them to deny access to victims of crime and their families. One of those family members was an aunt of the slain teenager who works as a nanny for a prestigious law firm in downtown Washington. Hogan Lovells took the case pro bono and submitted a Freedom of Information Act request. As it does in all cases, the Alexandria Police Department denied access to the documents.

"To be honest, I thought it was some kind of joke," said Martin Price, an attorney for Hogan Lovells. "It’s just hard to believe you can have a victim’s family completely left in the dark."