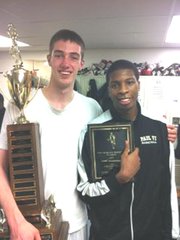 Based on recent analysis by ESPN, Paul VI Catholic High School, based in Fairfax, plays in the best high school basketball league in the country, the Washington Catholic Athletic Association (WCAC). The analysis is based on the fact that most of the players in the league wind up playing division 1 college basketball, as well as this year there being three teams that were ranked in the top ten nationally by various polls. Additionally, many of the players are ranked in the top 100 in the country. The league includes such well-known basketball high schools as DeMatha, Gonzaga and O’Connell. Paul VI just accomplished what has never been done in the 50-year history of the WCAC, a perfect 21 game, undefeated season in the WCAC, beating DeMatha on Monday, Feb. 27 at American University for the championship. While there have been a few undefeated teams in the past (all by DeMatha), those teams played when the league was smaller and they only had to win 15 games against non-ranked opponents to be successful. With the expansion of the league to 10 teams, to have a perfect WCAC now you have to win 21 straight games. This is exactly what Paul VI has done.

Tim Higgins, a junior at Paul VI and resident of Great Falls, is a member of the undefeated Paul VI team. Tim is 6’10"; plays center for the team and started in half of the games this season, including the championship game. Tim committed to play for Cornell University this past August, making him the youngest and earliest basketball commit in Ivy League history. At present, the Paul VI team includes 10 players who have already received offers or committed to play Division 1 college basketball, including conferences such as the Big East, ACC, Patriot league, Ivy League and others.