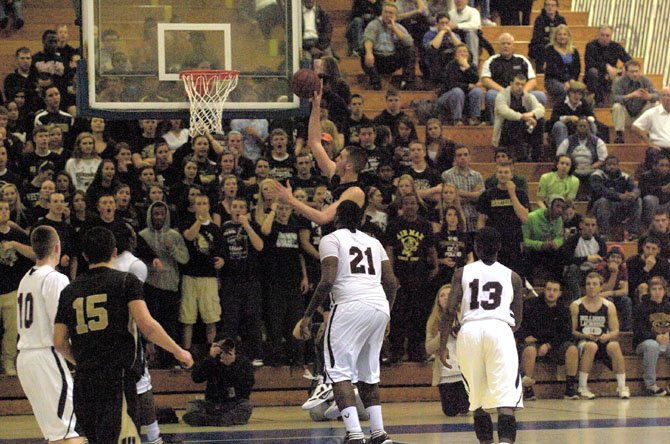 With the Westfield student body cheering him on, Zach Elcano goes up for a close range score in the title game that was played at Robinson. Photo by Craig Sterbutzel.

For a seasoned, talented Westfield High boys’ basketball team, the key to this season’s stellar postseason run, which reached a pinnacle when the Bulldogs captured their first-ever Northern Region tournament title, the result of a convincing 62-49 finals win over Edison this past Monday night, Feb. 27, at Robinson Secondary, has been its ability to simply continue during the playoff season what it did all throughout the regular season when the team from the Concorde District went 19-3.

Yes, there was early postseason disappointment when Westfield, which had gone unbeaten in district play during the regular season, lost 62-60 in the district tournament championship game to Robinson on Feb. 17. But the veteran Bulldogs’ group, which a year ago had seen its season end with a first round region tournament loss, simply put the disappointing close loss to the Rams behind and reeled off four consecutive region playoff wins to gain the crown.

“We worked hard for this so it’s a special accomplishment,” said Westfield senior guard Julius Rosa, who scored eight points, all in the second half, in the title game versus Edison. “This is the first time we’ve won the region in school history. We’ve put our names in the history of Westfield sports.”

Westfield now moves on to the eight-team state AAA playoffs and is set to meet Henrico High (Richmond) in a quarterfinals round game this Friday night at Robinson. Tipoff is scheduled for 8:45. Meanwhile, Edison will travel to Richmond to take on Petersburg High in another quarterfinals contest.

IT WAS NOT AN EASY region playoff ride as Westfield played close games in wins over Wakefield High, 57-55, and T.C. Williams, 43-38, in the opening and quarterfinals rounds, respectively. Both Wakefield and T.C., in recent region basketball history, have earned region titles so in defeating the two renowned programs Westfield, which trailed at halftime to both the Warriors and Titans, accomplished a lot.

Westfield then defeated this year’s Liberty District champions, McLean High, 55-41, in a semifinals game played on Feb. 25 at Robinson. It was a close game through three quarters before the Bulldogs, leading 42-39 going into the final quarter, outscored the Highlanders 13-2 in the fourth quarter to earn a spot in the finals and gain an automatic seeding for the state playoffs.

McLean had been the lone Northern Region team to hand Westfield a loss during the regular season, a 50-48 home setback on Dec. 9 in the third game of the season.

In the championship game on Monday, Westfield was going up against a red-hot Edison squad from the National District which had struggled early in the season with records of 1-3 and 4-5 before turning it on and ultimately capturing its district tournament title with a 63-54 finals win over Washington-Lee.

At regionals, the high flying Eagles defeated Herndon, Langley, and Fairfax, the latter win over the Rebels coming in overtime, to reach the meeting with Westfield. Edison, going into the championship, was carrying an eight-game win streak.

But while the underdog Edison team (19-9) had proven its merit by reaching the region championship, it was ultimately not good enough over four quarters to win over a defensive-minded Westfield squad known for its strength both inside and outside of the paint.

At game’s end, Elcano, in postgame ceremonies, was named as the tournament MVP. He was joined by both Basil and Gibson on the seven-member All-Region Tournament team.

Edison had two representatives named to the team – big man Matt Murphy and guard Tyrone Mackall, who led Edison with 17 points in the championship. Edison, as a team, earned the 16-team region tournament Sportsmanship Award.

The finals contest, like the three previous region playoff games Westfield was in, was close at halftime with Westfield holding a 22-21 lead over the Eagles at the intermission. But the Bulldogs, leading 24-23 early in the third quarter, then broke the game open with a game-defining 18-4 stretch over the final six-and-a-half minutes of the quarter.

Gibson scored the first two baskets of the Westfield streak – scoring on a layup off the left side before, moments later, converting a close range underhanded shot off a hard drive in the lane, in traffic, to give the Bulldogs a lead of 28-23.

Elcano scored shortly after on a driving short bank shot off the right side to make it 30-23.

After Edison got within 30-25 on a steal and breakaway layup by Mackall, Westfield’s Basil, perhaps the region’s best player in allowing the game to come to him and picking his moments to step up, then began a 10-0 Westfield spurt by nailing consecutive three-point shots from the left corner.

Elcano followed with a short turnaround basket before Gibson scored off a rebound follow-up to give the Bulldogs a commanding 40-25 lead with 1:32 remaining in the decisive quarter.

Westfield led 42-27 going into the final quarter and was never seriously threatened after that. Edison got as close as 50-43 on a free throw by Marcus Brunsey with 2:18 left to play. But Westfield baskets by Gibson and Basil, the latter score by Basil - a two-handed dunk shot off a drive from the left side – making the score 54-43 and bringing the loudest roar of the night from the Westfield faithful on hand.

The game was well in hand at that point. With one or two seconds left, a referee blew his whistle indicating a foul against Westfield. But the foul was wiped off the board because the outcome was decided and everyone realized two foul shots were meaningless. When an official indicated the game was over, the Westfield student body, which had anxiously been waiting for the game to officially end, stormed the floor, joining the players in celebration.

“We’ve been working for this for like three years,” said a smiling Elcano, in the minutes following the game. “We just played as a team all 32 minutes and poured our hearts out. This is the happiest moment of my life.”

For Gibson, Westfield’s 5-11 senior guard, the occasion was extra special because it was his birthday.

“This is the best day of my life,” said Gibson, echoing Elcano’s similar sentiments.

Of his team’s huge third quarter, Gibson said, “We got the first half jitters out of us. We relaxed more in the third quarter and were focused. I never played in a game with this big a crowd. But we didn’t focus on that. We did what we had to do and executed.”

Rosa, Gibson’s backcourt mate, said one huge key to Westfield’s championship season was that the players had each other’s back.

“There’s a feeling of togetherness on this team,” he said. “Sometimes a player might have an off night, but someone else is there to step up.”