Bulldogs, Warriors Take it to the Wire
Votes

Bulldogs, Warriors Take it to the Wire 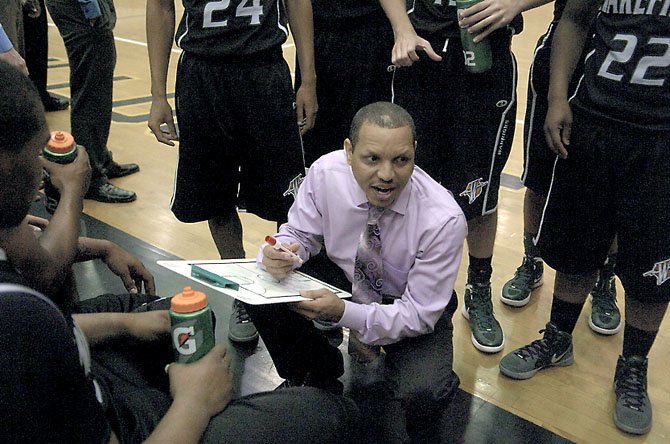 Monday night’s first round Northern Region boys’ high school basketball playoff game, between a physically strong Westfield squad versus a running, defensive-pressure oriented Wakefield opponent, was pretty much close throughout. Both teams, with their seasons on the line, played as if there were no tomorrow. The result was like a close boxing match gone the distance as both the Warriors and home team Bulldogs continually took one another’s best shots only to come right back and deliver one themselves.

In the end, Westfield, in a contest which was tied nine different times, delivered the final blow with a late game basket off an inbounds baseline play from underneath the Wakefield basket following a timeout. Westfield’s C.J. Hill, a 6-foot-2 inch junior guard, got free off the right side for a non-contested layup off a short inbounds pass from teammate Mark Gibson.

The close range basket came with just under three seconds remaining and broke a tie game. Following a timeout, Wakefield had one last chance but a desperation long range three-point shot attempt was off the mark and the Bulldogs were 57-55 winners in the down-to-the-wire postseason contest played in the cozily small, state of the art Westfield gymnasium.

“They are one of the more athletic teams we’ve played,” said Westfield senior forward Quentin Basil (13 points), of the Wakefield team. “That was an eye opener [early in the game], seeing how athletic they were. They were pressuring us defensively so we tried to attack on offense and distribute the ball.”

With the win, Westfield (21-4), which entered the 16-team regional tournament still stinging from a two-point loss to Robinson at last Friday’s Concorde District tournament finals, advanced to Wednesday’s region quarterfinals where it was scheduled to play in Alexandria at T.C. Williams High School. The Titans, members of the Patriot District, were first round winners over Jefferson on Monday night.

Meanwhile, Wakefield, members of the National District, concluded its season with a 13-11 record following the loss to Westfield. Coach Jeff Bentley’s team had qualified for the region playoff field as a result of a victory over Mount Vernon in first round play of the National District tournament last week. The Warriors, following the three-point win over the Majors, lost in the district semifinals to Washington-Lee, 63-60, last Wednesday, Feb. 15.

So for both Wakefield and Westfield, Monday’s first round regional meeting represented a second postseason life after disappointing district tournament setbacks.

Both squads, indeed, represented their respective districts in strong fashion with a high level of play in a game which only one team would advance and the other see its season end.

One big play at the end of the game – with Gibson, underneath the Wakefield basket with 4.7 seconds remaining, patently waiting to inbounds the ball before spotting the wide open Hill moving towards the basket – proved to be the game-winning play for Westfield.

The inbounds play was originally set up to get the ball into the hands of Basil, who was to receive the inbounds pass from Gibson and make a drive towards the basket where he, hopefully, would get off a good shot or perhaps kick the ball back out to an open teammate. But instead, Hill broke free and Gibson fed him the ball for the high percentage shot.

“Coach [Doug Ewell] drew up the play to come to me and I would drive in [the lane],” said Basil. “But Mark was patient and got the ball to C.J., and he made the basket.”

Wakefield High longtime head coach Tony Bentley, who once led the Warriors to a region title, credited Westfield with coming up with the big basket.

“They made a good play to make that last basket,” said the gracious Bentley, whose team began the season way back in early December with a 1-3 record before ultimately coming on strong and posting a solid 10-6 mark versus district opponents. “It was a really good game throughout. Our kids did really well for 32 minutes.”

EARLY ON, Westfield opened up an 8-2 lead, with four of the points coming from Hill (6 points). But Wakefield, with suffocating defense, held the Bulldogs to just three points over the final five minutes of the quarter. Meanwhile the Warriors got things rolling offensively and scored 13 of the final 16 points of the quarter to take a 15-11 lead. Wakefield junior shooting guard Khory Moore scored seven of his team-high 20 points over the game’s first eight minutes. Moore, with his ability to both hit the outside shot and get to the basket, was a tough player for Westfield to stop.

“He’s got a nice shot and attacks the basket effectively,” said Basil, of his opponent. “He’s one of the best scorers we’ve seen.”

“Khory Moore is not afraid of anything out there,” added Bentley. “He’s tough, can get to the basket, and takes the shots when we need it.”

Moore opened the second quarter by nailing a long range three-pointer – one of four treys he made in the game – to give Wakefield an 18-11 lead. But the home team Bulldogs did not stay behind for long, going on a 9-2 spurt and tying the game at 20 on a close range basket by 6-foot-11 inch senior center Zach Elcano with 3 minutes, 51 seconds remaining in the first half. Later, with Westfield ahead 26-25, Wakefield’s Drew Powell ended the half in dramatic fashion with a buzzer-beater three-pointer off the right wing to give the Warriors a 28-26 lead.

Wakefield’s Justin Glenn scored the first basket of the second half on a midrange jumper to make it 30-26 Warriors. But a three-pointer from the top of the key by Westfield point guard Julius Rosa pulled the Warriors to 30-29. Less than a minute later, Elcano scored from close range while being fouled. He made the ensuing free throw to give the Bulldogs a 32-31 lead, and then scored another basket 30 seconds later to make it 34-31.

Moore, however, tied the game at 34 with a three-pointer from the left corner. The game remained close the rest of the quarter. But Westfield got a huge play when Basil, following a teammates’ missed shot, went up for the rebound off the right side and, with his right hand, grabbed the ball and put it back into the basket in one swift motion for a huge basket at the third quarter buzzer to make the score 44-40 Westfield.

Early in the fourth quarter, Basil scored while being fouled. His conventional three-point play gave the Bulldogs a 47-41 lead. But typical to the game, Wakefield came storming back, going on a 12-4 scoring blitz which was capped with a three-point play by junior guard Corey Aldrich (10 points), who knocked down a 12-footer off the right wing while being fouled. His free throw gave Wakefield a 53-51 lead with 2:57 left to play.

Westfield’s Rosa, off an outlet pass by Elcano, made a driving, off balanced fastbreak basket off the left side to tie the score at 53 with 2:15 left. But Wakefield’s Aldridge answered with a pull-up 12-footer off the right side to give the Warriors a 55-53 lead with 1:52 on the clock.

But Westfield got the tying basket several moments later when Gibson scored on a hard drive off the left side to make it 55-55 with 1:26 remaining.

Westfield got the ball back on an Elcano defensive rebound. Ultimately, the Bulldogs scored the game-winner on Hill’s basket off the crucial late game baseline play.

WAKEFIELD’S Moore (20 points) and Aldridge (10) scored in double figures for the Warriors. Senior guard Devon Adams scored all seven of his points in the second half. Also for Wakefield, Justin Glenn scored six points and Powell five.

Bentley, the Wakefield coach, said he had scouted Westfield in recent weeks and was impressed by Basil’s all-around game.

“He’s one of the best players I’ve seen in a long time,” said Bentley, who said he had gone to sleep in recent nights trying to figure out ways to defend Basil. “Then you have to contend with their 6-11 kid [Elcano] who’s tough as nails. He had a real good game.”

Westfield’s disappointing district title game loss to Robinson last week – the Bulldogs’ first defeat to a district opponent all season – was a big motivator for the team going into regionals and the meeting with Wakefield.

“After losing to Robinson we wanted to prove we’re one of the best teams in the region,” said Basil. “It showed us we have to play good [fundamental] ball every night.”

“It shocked us and helped us pick things up a bit,” added Elcano.

The pivot player said the Bulldogs played particularly well in the second half of the win over Wakefield.

“We picked up our defense in the second half and played more as a team,” said Elcano. “My guards were getting me more touches and I got more confident. This is a good win and gives us momentum going into the second round of regionals.”