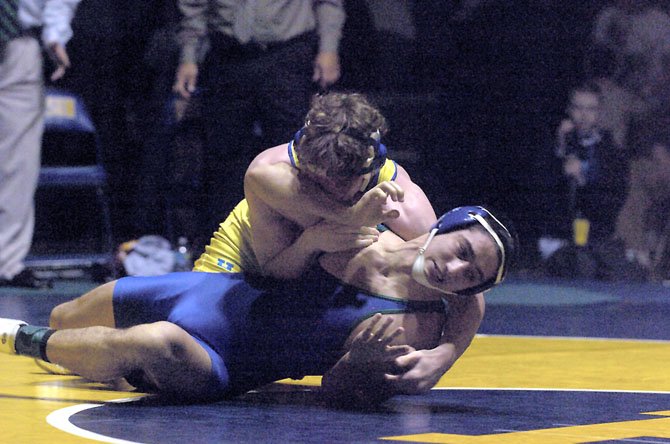 Ryan Forrest (bottom), South Lakes’ outstanding wrestler, got into trouble early on in his state finals match against Hopewell’s Cody Allala (top) when he was turned onto his back. But Forrest, who battled adversity throughout the entire postseason, prevented the pin and went the distance in the title match loss.

While third best in the state was a wonderful accomplishment for his junior year, Forrest knew he could do even better in his senior year and worked hard over the ensuing offseason in pursuit of doing so.

“That had been what I had been trying for 365 days after last year’s state finals,” said Forrest. “I had trained all summer and fall.”

Following an outstanding regular season, Forrest was as ready as could be by the time the postseason got underway in early February.

But that’s when he began to struggle with fatigue during matches. Over the next several weeks, Forrest, competing in his at 160 weight class, gave every ounce of energy he had in his postseason matches at the Liberty District, Northern Region, and state championships. He captured his fourth straight district crown but was not able to win a second straight region championship, finishing second place instead after losing his finals match to South County’s Brett Stein.

At states, the postseason tournament he had been looking so forward to over the prior calendar year, Forrest, with great grit and focus, won his first three matches to reach the finals and was so close to realizing his dream. But in the championship match, his state title hopes, much like his physical strength which had been all but sapped, were dashed in a 14-2 loss to Hopewell High’s Cody Allala.

“I thought it went pretty well,” said Forrest, of his gutsy showing at the state tournament, held locally at Robinson Secondary. “I had trained hard to be a state champion, so [not winning the title] was a bit of a bummer.”

FORREST CAME TO LEARN he has an illness known as creatine kinase, which occurs when blood levels of certain brain and muscle enzymes are raised. These raised enzyme levels can indicate several problems in skeletal muscle, heart muscle, and the brain. Overall fatigue is a result of creatine kinase as well. Forrest is under doctors’ care and recovering. He plans to play baseball for the Seahawks this spring but must take it easy over the next month or so and not exert himself physically. “I didn’t know what was happening,” said Forrest, who said he noticed a lack of energy and muscles not working properly during postseason matches. “I was really tired in districts and regionals and felt I needed to train harder to get into better shape. But the harder I trained the weaker I got. I felt extremely tired throughout the state tournament. In three matches I really struggled very much, but made it through [to the finals].” Forrest, at states, defeated Connor Smith of Cosby High (Midlothian) by second period pin in his first round match, than bested Orange County’s Sean Raftery, 7-4, in the quarterfinals. In a semifinals match, Forest edged Robinson’s Jonathan Simmons, 5-4. Forrest had also wrestled and defeated Simmons, 6-2, in the region semifinals. (Regionals, like states, took place at Robinson). In that regional tournament win over Simmons, Forrest said he utilized a cradle move for 20 seconds or so in the second period that zapped his strength. The strenuous move, he said, resulted in his forearms weakening. He struggled over the remainder of the match but managed to win. But, being far from 100 percent, he could not get past South County’s Stein in the region finals, losing 5-3. “I had a tough match in the semifinals,” said Forrest. “Then against Brett, I felt weak going out there. In the third period, I was kind of dead.” At states, despite the continuing physical struggles, Forrest reached the finals match versus Hopewell’s Allala, a senior ranked 15th nationally and aiming for his fourth state crown.
“On the car ride over [to Robinson prior to the championship match] my arms and legs were tired,” said Forrest. “I thought maybe I was going to be all right [and wrestle well]. But I was wrong.” Allala turned Forrest onto his back in the first period and was looking for a pin. But Forrest said he was not about to let that happen. “I’d never been pinned and I was not going to be pinned in my last [high school] match,” said Forrest, who prevented the pin and went on to go the distance in the loss. OVER THE SEASON, Forrest was 44-6 overall. Four of his losses came earlier in the season at nationally renowned events - Beast of the East in New York and Eastern States. His other two setbacks came in the region and state finals.

Last year as a junior, Forrest had gone 41-1 but said his senior year schedule was more difficult, accounting for the handful of losses.

For his high school career, Forrest won 114 matches, the most in school history.

Forrest, whose younger brother, Josh, was the 170-pound district champion this winter, said he has enjoyed wrestling under Seahawks’ head coach Bruce Hall.

“He’s very energetic at times,” said Forrest, who said Hall, throughout the season, would serve his wrestlers peanut butter and jelly sandwiches with Gatorade on match days. “He’s moved the program along and definitely cares about the team. He’ll do anything for these kids. He is the head of the South Lakes wrestling family.”

Forrest, who grew up in Reston, said he is still weighing his college options. He has interests in business and well as the medical field. He carries a 4.0 grade point average in the International Baccalaureate program at South Lakes.

“He will be a great wrestler wherever he ends up,” said Hall.

A four-year varsity letter earner, Forrest will wind up his high school athletic career as a fourth year varsity member of the South Lakes baseball team this spring. He played right field and saw some infield action last year. This season, he is expected to see action at several positions, including work on the mound.

Along with his busy academic and athletic life at school, Forrest is also an Eagle Scout with Troop 20.