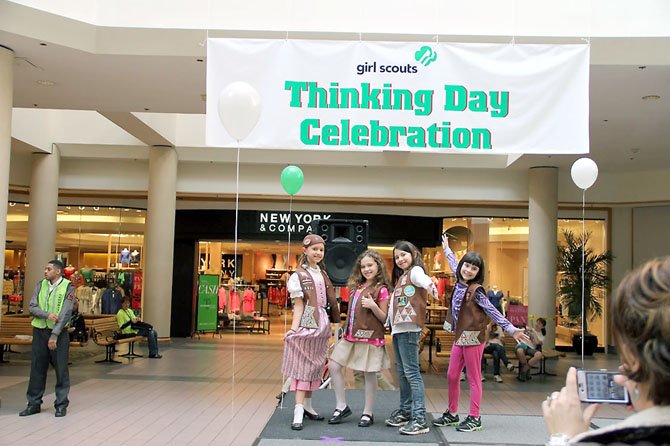 Annie Sneed of Ambassador Girl Scout Troop 4001 in Springfield teaches the chicken dance to Daniella Rajwan, Samantha Gelfand, Audrey Goldman and Keira Newlon of Brownie Troop 1335 of Burke during a break in troop performances as area Girl Scouts recognized their 100th Anniversary celebration at Springfield Mall on Feb. 18. Sneed was a member of the planning committee for the celebration.

To mark the 100th anniversary of Girls Scouts of the USA, the South Central Fairfax Association of the Girl Scouts of the Nation’s Capital (GSCNC) hosted a celebration that drew more than 2,000 participants to Springfield Mall on Saturday, Feb. 18.

"The 100th Anniversary Thinking Day Celebration offered something for everyone," said Carol Ann Cunningham, chair of the CSCNC’s Fairfax chapter. "We had 1,100-plus current Girl Scouts in attendance, which made it the largest local gathering of girls for the 100th anniversary celebration to date in the Nation’s Capital Council."

Throughout the four-hour event, 25 local Girl Scout troops performed on stages and displayed information they learned about countries with Girl Scouts and Girl Guides around the world at more than 75 display tables.

There was also a flag ceremony and international parade of flags through the mall, an international fashion show by members from 15 local troops, a presentation by re-enactors portraying the founders of Girl Scouts and Boy Scouts – Juliette Gordon Low and Lord Robert Baden-Powell - and a closing promise circle at 2:15 p.m.

Members of Junior Troop 3503 from Laurel Hill Elementary and Halley Elementary Schools in Lorton perform a Colombian cumbia dance on the main stage at Springfield Mall on Saturday, Feb. 18.

The event also included trading swaps, as well as booths featuring Girl Scout history, local Girl Scout camp opportunities, Girl Scout cookie booth sale locations, and information about joining Girl Scouts as a girl or an adult volunteer. Girl Scouts – whether they were local, national or alumni – were invited to share their favorite memories on videotape at a booth recognizing the contributions of Girl Scouts to leadership and community service through the years.

"It was great to have such a good turnout to watch the troops on stage, because we had Girl Scouts in high school who served as the entertainment coordinators, emcees, stage managers, and fashion show coordinators to make the event a success," Cunningham said.