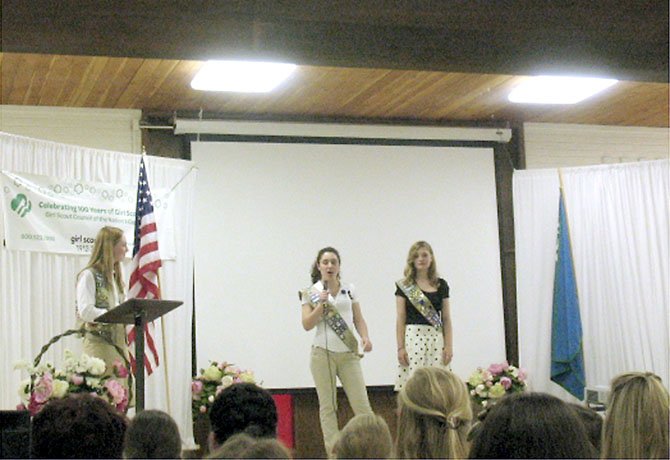 Over two hundred people gathered Tuesday night, May 15, in West Springfield to honor Girl Scouts of Association 52 of the Girl Scout Council of the Nation’s Capital (GSCNC) at their Fourth Annual Spring Precious Medals Ceremony titled "100 years of Helping Hands."

Allison Howl and Claire Schindler, silver award winners began in the same troop in elementary school. Then Allison moved with her military family to different posts and was reunited in high school with her troop buddy, Clair. Both have been working on service projects under the direction of Maria Murphy, Co-Advisor and Vice Chair of Association 52.

Katelyn Sparks of Troop 374 was among those honored at the Precious Medals Ceremony. She won the gold award for her work on Project Smile—Socially, Mutually Involved of Life Enhancement Carnival. As part of the project she reached out to high school students and encouraged them to socialize with students with disabilities and to do so in a fun setting.

The Nation’s Council had 221 girls win the gold award in the past year. No other Council in the country has beaten this record of over 200 gold medals since 2008. At any given time, fewer than 3 percent of girl scouts have earned a gold award for over 100 hours of service to the community. The Nation’s Council has topped the list each year for the past five: 180 girl scouts won the silver award and over 100 won the bronze – the highest national award a 4th or 5th grader can win. Those with bronze or silver awards set their eyes on the gold by emulating those who had earned their gold. Helen Sande, 13, said while holding up her bronze award, "I’m helping my friend who is working for her gold."

A "helping hands" spirit was prevalent in the voices and actions of all those who were honored on Tuesday. Alexa Chavera, 15, who is working towards her silver award coordinated the invitations for the event and helped organize the event. When asked about what it felt like to be an organizer of the event, she said, "Katelyn Moore did most of the work. I just helped her."

Carol Ann captured the essence of the 100 Years of Helping Hands in an email message where she said, "Everything we do is for the girls and the evening was all about honoring their hard work!"