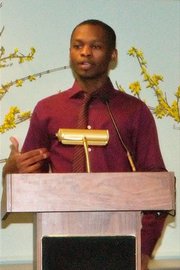 South Lakes High School chose senior Franck Simo to receive a Student Peace Award. Simo was born and raised in Cameroon, a country in West Africa, and moved to the Reston area in November 2008. Simo recalls, “I was not just astonished by the beauty of the little city but also by the extreme enthusiasm of the students who welcomed me with opened arms. I didn’t know how to speak any English or how to listen correctly. Fortunately, I received special care, as did other students, from my ESL teachers who paid very close attention to us. It was difficult, but the spirit of involvement in school activities and the willingness to adapt to the new culture made it possible to increase my level of understanding of the English language.”

Since arriving three years ago, Simo has been an effective advocate for ethnic minorities. Last year Simo coordinated a meeting with the principal and assistant principals of South Lakes High School to discuss the needs of the school’s ESL (English as a Second Language) population. He expressed not only concerns, but also proposed practical solutions. In particular, he spoke with the administrators about ways to get the ESL students more involved in extracurricular activities.

Simo is an officer in the College Partnership Program (a club for first generation, college-bound students) and SLICE (South Lakes International Club for Education). Simo is not only active at South Lakes High School, but in his community as well. He volunteered with the local Reston Association and Chamber of Commerce for their annual multicultural festival. He is a member of “City of Peace DC”, a youth development organization that uses performing arts to teach and promote cross-cultural understanding.

This school year Simo was elected to be a member of the Student Council. He was the first ESL student to run and win a Student Government Association election in the school history. This year, during homecoming week, he kept his campaign promise to involve special education students in the school activities. His Counselor, Tracey Albert, says “Franck Simo is a remarkable student and I have no doubt that he will unrelentingly achieve his future goals.”