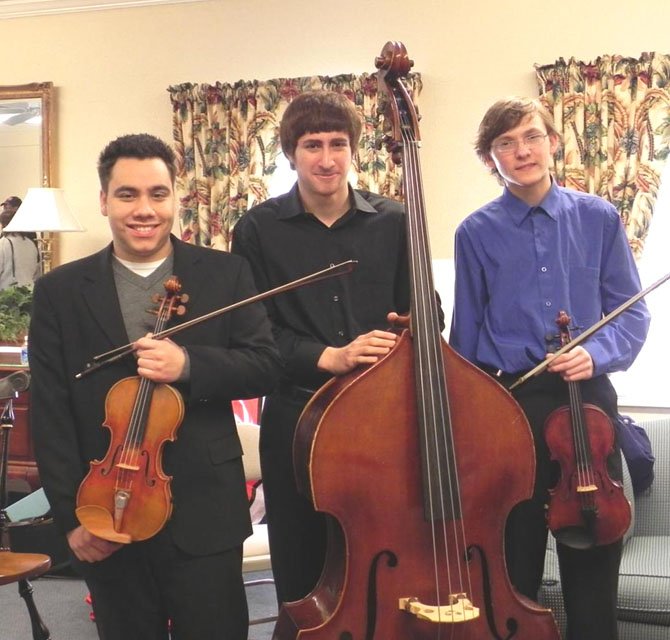 Former FSO board chairman Tom Brownell and music director Christopher Zimmerman presented the students with their awards in front of the Fairfax Symphony’s concert audience of 1,200 people at the Center for the Arts in Fairfax.

Fedor Ouspensky, violin, first place winner, received $1,000 which he will use toward a summer music camp.

Michael Lewis, bass, second place, will apply his $750 award toward tuition at a conservatory.

Cory Riviera, violin, third place, will use his $500 award for tuition at music school next year.

Michael Lewis is a junior at West Potomac High School in Fairfax County, and has been playing the double bass for seven years. He participates in the National Symphony Orchestra’s Youth Fellowship program, where he studies with Paul DeNola, and has participated in the National Symphony Orchestra’s Summer Music Institute. He has also played in West Potomac High School’s orchestra, the American Youth Philharmonic, and the Virginia State Orchestra.

Judges for the final round were David Salness, FSO Concertmaster, co-artistic director of the Left Bank Concert Society, and professor of violin and director of chamber music studies at the University of Maryland; Richard Parnas, viola, former principal viola with the National Symphony Orchestra, and currently principal violist with the Alexandria Symphony; Steven Honigsberg, cello, a member of the National Symphony Orchestra and founder of the Potomac String Quartet.

The Feuer Competition has been held since 1964 and is named in honor of one of the FSO’s founding members. It is open to advanced string students in the 7th – 12th grades in the Northern Virginia area. There were 30 total competitors in the preliminaries, and 11 in the finals. The competition is one of the Fairfax Symphony’s many efforts that support the education of young musicians in Fairfax County and Northern Virginia. For more information about this and other education programs, please visit www.fairfaxsymphony.org.