Between Washington and Lee
Votes

Between Washington and Lee 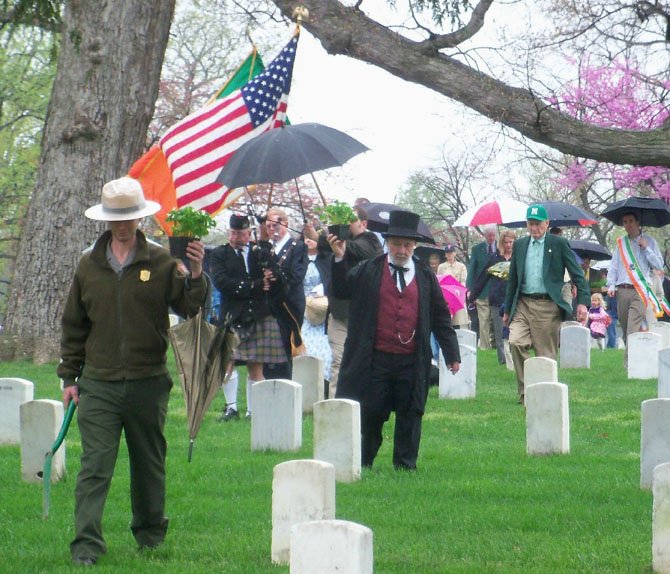 The parade approaches the grave of George Washington Parke Custis.

Who was George Washington Parke Custis?

Custis (April 1781-October 1857) was buried on his plantation-estate at a site now called Section 13, Arlington National Cemetery. Due to turmoil before, during and after the Civil War, he was soon forgotten. By chance in the mid-20th century, a historian uncovered memorable words uttered by Custis in 1844. The result is an unusual ceremony known to few in Northern Virginia.

Held during the "St. Patrick's Season" (not always on St. Patrick's Day), hosts for the gathering are the National Park Service and the Ancient Order of Hibernians (AOH), a fraternal organization of Catholic Irish Americans. The immediate sponsor is District of Columbia State Board, AOH. Lasting about one hour beginning around midday, the

proceedings take place on the front steps of Arlington House, weather permitting. Presentation of the "George Washington Parke Custis Friend of Ireland" award is the centerpiece. Next comes a main address, followed by remarks of the Irish Ambassador, or his designee, and a short parade behind bagpipers to Custis' nearby grave where a clutch of fresh Irish shamrocks provided by the Irish Embassy is planted.

Custis was an educated man, author of plays and histories, a painter and the self-appointed guardian of the memory of George Washington. One point learned at the knee of his adoptive father was deep affection for the Irish, instilled by the many who served during the Revolutionary War. Custis recalled that George Washington happily accepted honorary membership in the Friendly Sons of St. Patrick, in 1782, saying "I accept with singular pleasure the ensign of so worthy a fraternity .…"

From the mid-1820s to his death, Custis vocally supported the cause of Irish freedom from Great Britain and traditionally was the main speaker at St. Patrick's Day festivities across the river in the Capitol City and in Alexandria. Once he admitted that the Fourth of July, Washington's Birthday and St. Patrick's Day were "the three holy days" he observed "with religious fervor." His final years coincided with the Know Nothing Party which opposed everything Irish and Catholic. Custis held to his principles and never gave ground in his defense of both, even while remaining in full communion with the Protestant Episcopal Church.

Originally formed to protect priests and churches in Ireland, AOH's roots are hundreds of years old. In 1836 at New York City, the group "jumped the pond" and is the oldest Catholic lay group in the country. There is no surprise in why the AOH would embrace the memory of George Washington's son.

It remains only to tell what the historian found.

Custis concluded his long ago St. Patrick's Day Banquet oration with reference to Ireland's independence, some day in the future. When that occurs, he said, "I trust in God that … though years after my mortal body shall have been laid in the bosom of our common mother, some honest Irish heart may come and, dropping a shamrock on my grave, cry 'God Bless him'."

Last Saturday, March24, the AOH honored that request, as it has done for 56 years.