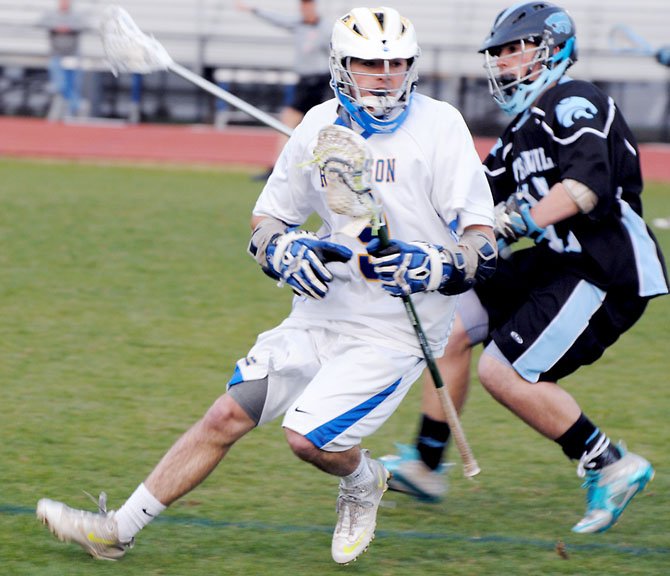 Hunter Jasien, a senior midfielder for Robinson, makes his move with the ball during the Rams' Concorde District home game win versus Centreville on April 24. Liz Shaw

Burke — It has been a season of streaks for the Robinson Rams boys' lacrosse team, which has won or lost this spring in bunches. But the Concorde District squad has been playing a good brand of lacrosse of late and appears to be at a good place with the postseason set to begin this Friday night with the start of the six-team district tournament.

"We were making poor decisions and turning the ball over, but we seem to be coming together as a group at the right time," said Robinson head coach Matt Curran, whose team closed the regular season with a close 6-5 loss at district opponent and defending Northern Region champion Chantilly High last Friday night. The loss snapped a three-game win streak by the Rams and put their record at 6-5 on the season.

But that was followed by a string of four straight losses - at home to Woodson (Patriot District), 6-5 on March 26, and non-region opponent Kettle Run (Northwestern Region) of Nokesville, 12-10; and on the road at Concorde opponent Westfield, 7-6 on April 12 and perennial private school power Landon (Interstate Athletic Conference), 12-5 on April 14.

"We came out pretty hot, starting the season 3-0 with a great win in our first game against Stone Bridge," said Curran. "We then went on to lose four in a row. We played some good teams during that stretch, but we were certainly not putting it all together in those games. We have some great veteran leadership on our team, but we also play a bunch of freshmen and sophomores."

ROBINSON BROKE the four-game losing streak with a season-altering 7-6 district home win over Oakton in overtime on April 17 in the Rams' second district contest of the spring, improving their overall record to 4-4 and their mark in the Concorde to 1-1.

"I think the highlight of the season thus far was the overtime win against Oakton," said Curran. "We showed perseverance and were able to pull that one out."

In that hard-fought win over the Cougars, senior Clark Pietruszka, who made a switch from attack position to midfield, scored four goals, including the game-winner.

Robinson followed the dramatic win over Oakton up with district triumphs in its next two games - at Herndon, 13-7, on April 20, and home versus Centreville, 10-6, on April 24 before the three-game win streak was snapped with the one-goal loss to Chantilly on Friday.

"We have had some amazing play out of our seniors," said the coach. "Hunter and Sean at midfield have been stalwarts. Alex Barber, who missed the first two games of the season, has been fantastic on attack. He is fast, strong, has great stick skills, and he has a very hard shot. Our defense is anchored by senior Brady George, who I believe is the best defensive player in the Northern Region. He shuts down our opponents' best offensive player. He is a ground ball machine, a one man clear, and a valuable offensive threat. Brady also grabs a short stick and plays on the man-up unit. I put him on man-up because he has a 100 mile per hour shot."

Curran is looking forward to this week and next week's district tournament as well as the upcoming 16-team regional playoffs. The Rams will be a tough opponent for any team they face this postseason.