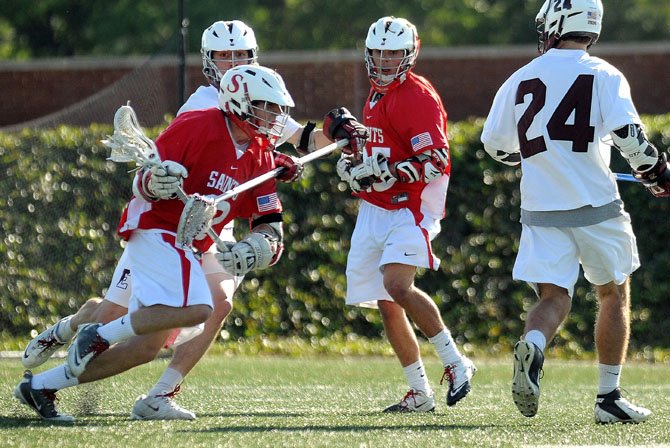 Alexandria — It has been said records can be thrown out when rivals play one another. On April 27, the St. Stephen’s & St. Agnes boys’ lacrosse team might have disregarded Episcopal’s record, but it didn’t forget the Maroon’s three-game win streak between the Alexandria programs.

The Saints led 8-0 at halftime and cruised to a 12-1 victory at Episcopal High School. Seth Miller led the Saints with four goals while Brent Armstrong added three.

"We really wanted it because they’ve beaten us the past three times we’ve played them," Armstrong said, "… and a lot of us know these guys, a lot of us are friends. It’s a fun rivalry. There are no ill intentions."

Armstrong scored back-to-back goals in the third quarter to extend the Saints’ advantage to 11-0.

"He’s a great person, he’s a great leader on our team, he’s got as good a work ethic as anybody on our team, and yet he’s the best player, as well," SSSAS head coach Andy Taibl said. "He doesn’t take breaks, he doesn’t look for other people to do the little things. The success that he has, it’s all deserved because he earns it. He doesn’t take shortcuts."

The IAC quarterfinals are scheduled for Saturday, May 5.