Saints extend winning streak to 25 games dating back to 2012. 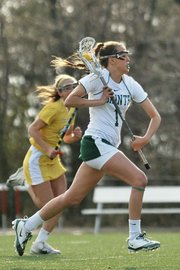 Alexandria — With seven state championships, more than 20 league titles and a head coach with more than 600 career victories, there isn’t much left for the St. Stephen’s & St. Agnes girls’ lacrosse program to accomplish.

On Monday, however, this group of Saints faced a challenge they had yet to conquer. St. Stephen’s hosted Baltimore’s Bryn Mawr, having lost to the Mawrtians each of the last three seasons. While head coach Kathy Jenkins said the Saints only discussed how to improve from last season’s loss to Bryn Mawr, senior Carly Reed, the Saints’ all-time leading scorer, had all three losses on her mind.

“That’s what I thought about the most is how we lost the past three years,” Reed said after the game. “I always knew we could beat them — last year we lost by one. We knew we had it in us and this year is [the seniors’] last year, so we knew we had to win.”

“It’s always been one of our biggest games and we really wanted to come out and beat them and I knew we could,” said Fogarty, who will play at James Madison University. “I feel like today we just came out really fired up and we had a lot of confidence ..."

“We were trying to work defensively because they were able to get around us and get good shots off last year, and I said we really need to try to take them out of that and force them back to use their left hand more,” Jenkins said. “We spent time on that and I think it paid off. We know they play more of a zone [defense] and they double really well and trap, so we talked about really moving the ball and sending a cutter out and a cutter in because at that point we’ll hopefully get an opening in front of the goal, and I felt like that worked, too.”

“That’s what I thought about the most is how we lost the past three years. I always knew we could beat them — last year we lost by one. We knew we had it in us and this year is [the seniors’] last year, so we knew we had to win.”

“The whole time in California, the teams we played out there that were really strong; they said they thought Gussie was the difference,” Jenkins said. “When they got opportunities to score, Gussie came up with big saves, so they never got any rhythm on their shooting or their attack because Gussie was so dominant in goal.”

The Saints improved their record to 8-0 and extended their winning streak to 25 games, dating back to last season. St. Stephen’s & St. Agnes has gone undefeated eight times in program history, the last coming in 2008.

Does the possibility of going undefeated cross the Saints’ minds?

“It’s more of keeping the legacy, keeping up the reputation than it is to be undefeated,” said Reed, who will play for the University of North Carolina, “but being undefeated is what we’re aiming for.”