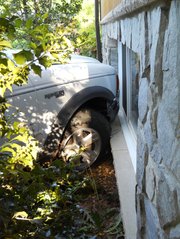 Luckily no one had been in the front yard when the truck struck the house.

My wife, Diane, and I were just about to go out for dinner at about 5:30 p.m. on Thursday, May 3, and we were giving the boys some last-minute instructions. She and Liam, 12, were at the computer in the living room in front of the house and she heard what sounded like a car accident. She assumed it was on Follin Lane behind us so she came into the Sunroom in the rear where I was with Sean, 15, and his friend, and she asked us what that noise had been. We had no idea. A minute later she told me that I needed to come out front --that someone had just driven into our house. I thought she was joking, but obviously she was not. The truck had struck the house just 15’ from where she and Liam had been.

Luckily no one had been in the front yard. The driver told the police officer that he had had a coughing fit and passed out behind the wheel.