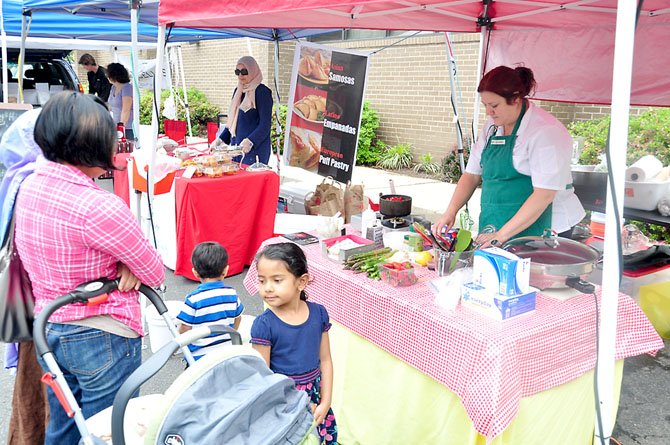 Annie Sidley, chef at the Reston Smart Market, prepares a dish made from ingredients available at the market. Photo by Alex McVeigh.

Reston — The Reston Smart Market, featuring guaranteed producer-only produce, meats, dairy and other goods has kicked off for the summer season. This year’s incarnation has a few new vendors, and Jean Janssen of Smart Markets says the new additions help fulfill some of their goals.

"Fossil Rock is a new vendor, they’re a sustainable and organic farm," Janssen said. "We didn’t have any of those before, but it’s always been a goal, so we’re glad to have them." 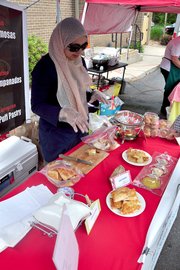 Nancy Khan of The Finger Buffet shows her delicacies at the Reston Smart Market Wednesday, May 9.

Another new addition is Nancy Khan and The Finger Buffet. Khan started her business last year, specializing in Mediterranean and Middle Eastern Food such as samosas, hummus, lentil curry and empanadas.

"As a new business, I’ve found the Smart Markets are a good way to get in touch with buyers, find out what people like the most," she said. "I like to bring out ‘fast food’ style items from all over the world. The lentil curry has been one of the most popular."

Diana Tweedy of Herndon started coming to the Reston Smart Market when they opened a few weeks ago, and says The Finger Buffet is one of her favorites.

"It’s such an eclectic combination of foods from all over, and they’re all so good," she said. "My favorites are the empanadas, I love all four kinds, I usually get a dozen per week and they don’t last too long in my house."

Nyall Meredith is another newcomer to the market. A native of Wales, he moved to the U.S. two years ago to get married, and decided to go into business and pay homage to his heritage.

"It’s a pastry envelope stuffed with savory filling, typically beef, potatoes, carrots, that sort of thing," Meredith said. "We’ve got about 30 different recipes, some are standards, like the cottage pie and the beef and Guinness, and we experiment with other ones. We try and switch it up week to week, but some get so popular that we make it a regular." 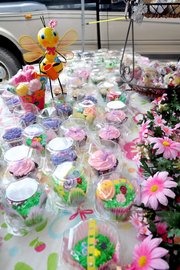 A selection of baked goods from Cakes by Shelby on display at the Reston Smart Market.

Cakes By Shelby is another popular spot at the market, and owner Shelby Biancaniello is fond of putting new twists on classic desserts. Her mini-pies and inside-out cupcakes (with the frosting on the inside) and cake pops are among her signature items.

In her nine years in the business Biancaniello has had her share of famous clients.

"A few years ago I made the cake for [Washington Capitals player] Alex Ovechkin’s 21st birthday, we made it in the shape of his jersey," she said. "I can do signature cakes for almost any occasion, in almost any shape and I’m one of the only people around who can do that."

Max Tyson of Tyson Farms in West Virginia has been coming to Smart Markets for the past three years. He’s currently offering strawberries, asparagus and a variety of apples, but he says more will be coming in as the season progresses.

"We’ve got a lot of different fruits coming in, peaches, plums, nectarines, pears and cherries," he said. "I’ve really enjoyed my time here at Smart Markets, and it’s gotten better every year.

Later on in the season there will be an empanada vendor, and a certified organic farmer from Prince William County.

El Ceibo chocolates is one product that doesn’t come locally. The chocolates are produced by a 12,000-family co-op in Bolivia.

"Most chocolate on the market is about 17 to 25 percent sugar, ours ranges from three percent to 10," said Pastor Payllo of El Ceibo. "Our co-op is responsible for everything from the cocoa trees to the packaging, there is no middleman."