Remembrance Cabaret for Reema is May 26
Votes

Remembrance Cabaret for Reema is May 26

Centreville — When many of her friends and relatives recall Reema Samaha, they picture her on a stage performing. She acted in Westfield High theatrical productions, but was especially known for her beautiful and graceful dancing. 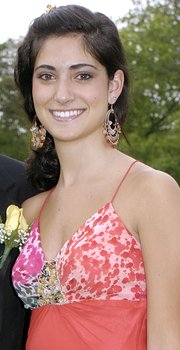 A 2006 graduate, she was in her freshman year at Virginia Tech when she lost her life in the April 2007 tragedy. But her memory and spirit live on and, in fitting fashion, her family and friends gather in Westfield’s theater annually to enjoy performances on stage in her honor.

This year’s Remembrance Cabaret is Saturday, May 26. The show starts at 7 p.m., but the doors open at 6 p.m. for a bake sale and silent auction, which will continue during intermission.

“This is an important event for our community to remember and reflect on the incredible life of Reema Samaha,” said Dillard. “It’s not only to honor her through dance, music and comedy, but to come together to celebrate life and the gifts we are given. This cabaret reflects her creativity, love and overall positivity that shined on and off stage.”

“Reema was one of the most beautiful, talented, funny young ladies I have ever known,” said McNabb. “In any performance — whether in the ‘Nutcracker Suite’ as a young girl, or [later] in ‘Fiddler on the Roof,’ ‘Arsenic and Old Lace’ and the Westfield talent show — one would always see Reema’s eyes and her smile. She stood out always. But for my family, it was her friendship and love for all of us that endeared us, and we miss her terribly.”

The event is free, but donations are welcome. Attendees may contribute to The Reema J. Samaha Memorial Scholarship — awarded to students at both Westfield and Herndon high schools — and/or the Angel Fund, which advocates for common-sense gun legislation.

Besides being an evening packed with entertainment in Reema’s memory, said McNabb, “The Cabaret is a reflection of her love because the young people who return year after year turn in incredible performances to honor her.”

“We are so moved, too, by other young people in the community who may not have known Reema, but who want to participate because the Cabaret is so much fun,” she continued. “It is inclusive, representing all of the arts, encouraging all young people to participate whether by singing, dancing, acting or submitting works of art.”

Tontodonato, who was the recipient of the CDE’s Reema J. Samaha Memorial Scholarship for the 2011-2012 school year, will also dance to “Sing, Sing, Sing!”

One of the most-memorable moments of each year’s cabaret is CDE’s performance of “Andaloosia,” the dance Reema choreographed for the group when she was at Virginia Tech. It’s become a tradition that the audience looks forward to, and doing it this year will be Clark, Famularo, Magarelli, McMullen, Milan, Spikes and Tullia Johnston.

Entertaining, as well, will be past and present Westfield students, plus students from Herndon High. They include Westfield’s Colby Dezelick, Joey Biagini and Madeleine Bloxam; Herndon’s Paul Morgan and Molly Nuss, plus the Herndon High Improv Team.

An original comedy sketch will feature Westfield alumni Megan Meadows, Jesse Leahy, and Omar and Randa Samaha — Reema’s brother and sister. Two other WHS grads, pianist Philip Eberhart and Barret Armbruster will also participate. Armbruster will be one of the emcees.

“For me, ‘Andaloosia’ is the most-moving performance of the evening, because Reema choreographed that dance, and you can see her in the grace of the Virginia Tech dancers,” said McNabb.

“And it was even more so last year when Randa stepped into Reema’s part. Over the years, there have been so many memorable performances at this cabaret; and in my opinion, their professional quality makes this event truly memorable and special.”

At the silent auction, attendees will be able to bid on an array of items — including a bat and balls autographed and donated by members of the Texas Rangers baseball team. Available will be a baseball bat signed by Westfield grad Brandon Snyder, plus baseballs signed by Josh Hamilton, Michael Young, Ian Kinsler and Adrian Beltre.

Many other auction items are handmade and created by local artisans. Available will be three watercolors created by Mellissa Frangias, a charcoal portrait offered by Amy Mann and bracelets made by Alyssa Hutchison.

Mary Lee Cerillo is donating butterfly print notecards that she photographed and made. There’ll also be a T-shirt designed and hand-painted by Michelle Alber and Debbie Love, plus Kazuri jewelry made in Kenya. Also up for bid will be photographs, paintings, drawings, pottery, hand-painted clothing and children's gifts.

Looking forward to a good turnout for the cabaret, Dillard said, “You do not have to have known Reema to come to this — everyone is welcome. The talent and collaboration is truly incredible every year. Spanning from dance solos to comedy sketches, there really is something for everyone. I am honored to organize this event each year and carry on Reema’s spirit through the arts.”